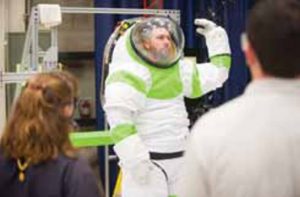 NASA’s Johnson Space Center’s Advanced Exploration Systems team are in the midst of developing new spacesuits that can be used by future astronauts to explore extraterrestrials bodies such as Mars, the Moon, or asteroids. The Z-1 prototype goes one step further: it can can replace not only existing spacesuits but airlocks as well.

The Z-1 is donned via a rear entry hatch that is sealed with a backpack-like life support pack. When the pack is not attached, the hatch can be docked directly to a rover or spacecraft. The suit is designed to work at cabin pressure, enabling astronauts to shorten their pre-breath preparation – potentially hours of time when astronauts are usually stuck in a suit adjusting to the gas composition and pressure they will need to rely on while on extravehicular activity (EVA). The prebreath prevents decompression sickness, whose most common symptom, “the bends,” occurs when bubbles of nitrogen rise out of a person’s blood supply, gathering at their joints and causing potentially severe pain. Not only does the suitport, as its being called, shorten lengthy and tedious preparations, it can potentially prevent the loss of valuable breathable air supply that is normally vented from the airlock along with the exiting astronaut.

NASA’s current spacesuits are decades old and do not take advantage of developments in materials that could significantly improve their performance. The suits are also designed primarily for EVAs from the retired Space Shuttles of the International Space Station. They are not optimized for surface operations. “We haven’t built a new flight system since the EMU (Extravehicular Mobility Unit),” Amy Ross, lead of the Space Suit Assembly Technology Development team. “The last major prototype we developed was in 1992.”

Since NASA currently does not have a particular target body it is planning to visit, Ross’s team is trying to make the suit as flexible as possible – both via its hard joint bearings and by designing it for use on any number of extraterrestrial bodies. “The goal is by the 2014/2015 timeframe to have a new vacuum-compatible exploration-type suit,”  said Spacesuit Engineer Kate Mitchell. “The Z-1 was developed as a test bed to go and test various technologies and mobility joints so we can further define our architecture going forward.” 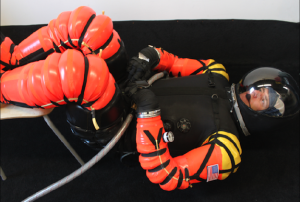 Of course, these days, government agencies are far from the only game in town when it comes to spacesuit design. In 2009, NASA held a public competition for design of the best spacesuit glove. The second place winners from that competition, Ted Southern known for designing costumes like the well-publicized Victoria Secret angel wings and Nikolay Moiseev known for working as an actual spacesuit engineer at Russia’s Zvezda, decided to tackle the whole suit. With $27,632 gleaned from a recently funded Kickstarter campaign, Final Frontier Design,  promises “to bring our vision of  lightweight, inexpensive, and highly functional space suit to the new space industry.”

And they’re not the only ones. When Felix Baumgartner attempts his record breaking 36,576 meter skydive in August, he’ll be wearing his own custom designed spacesuit. His suit was designed by the David Clark Company, responsible for the first pressurized suits for World War II fighters. “This mission is all about pioneer work,” Baumgartner said in a February 7 statement. “Maybe one day people will look back and say it was Felix Baumgartner and the Red Bull Stratos team that helped to develop the suit that they’re wearing in space. We want to do something for posterity.”

When it comes to designing spacesuits, the sky is no limit.

Ross introduces the Z-1 prototype below: