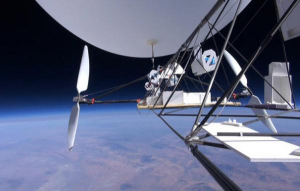 On October 22, a prototype high-altitude named Tandem set a new airship altitude record, flying above the Nevada Black Rock Desert at 28, 982 meters above sea level. This new way to space has not and will not require a massive pile of capital to accomplish,” said a JP Aerospace official. “The big aerospace firms have been trying to do this for decades, spending hundreds of millions of dollars,” said John Powell, president of JP Aerospace. “We’ve spent about $30,000 and the past five years developing Tandem.”

The airship, designed by JP Aerospace, consists of a 9-meter carbon-composite truss, two lift-creating balloons, and two electric 2meter propellers, designed to operate at altitudes up to 32.2 kilometers. During the flight, the airship was piloted remotely through a series of maneuvers, after which both balloons were jettisoned following a rupture in one of the balloons. Tandem was returned to the surface by 5 parachutes, where it was successfully recovered.

The airship was developed over 5 years at a cost of 30,000 USD, and is a part of JP Aerospace’s “Airship to Orbit” program, which seeks to use a series of high-altitude airships to reduce the cost and risk of placing an object in low-earth orbit. The completed project would consist of three components: an atmospheric airship, similar to Tandem, that would transport a crew of three passengers and cargo to an altitude of 42,700 meters using electrically driven propellers and a combination of aerodynamic and buoyant lift; a suborbital space station, that would remain at 42,700 meters using buoyant lift and act as a departure location to orbit and the construction facility for the orbital airship and n orbital airship, that would use a combination of aerodynamic and buoyant lift to remain at altitude, while the craft is slowly accelerated to orbital velocities by electric ion thrusters over a period of 5 days. According to an undated document on the JP Aerospace website, the company aims to conduct its first manned flight in 18 months, and to complete the entire program in 7 years.

In the video, below, some clips from the flight.