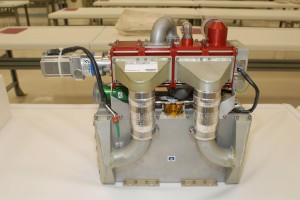 Providing breathable air is among the top priorities for a manned spacecraft design. CAMRAS, an experimental unit flying onboard the International Space Station (ISS), consists of multiple layers of amine-based filter beds to remove carbon dioxide and moisture from the station’s environment. After reaching its full absorption capacity, the assembly rotates to emit the CO2 and moisture into space, after which it can rotate back towards the interior and continue filtration. The cycle facilitates uninterrupted CO2 removal.

Use of amine based technology is not new; what makes CAMRAS different is its small size and reduced power requirements compared to the current systems. Efforts to reduce the size of the system are underway for its integration on the Orion spacecraft. 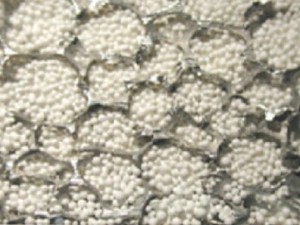 CAMRAS and the larger Amine Swingbed assembly have been on ISS for some time, but initially encountered some technical difficulties. “The CAMRAS itself works fine, as years of ground testing (with and without human test subjects) have demonstrated,” said Jeffrey Sweterlitsch, principal investigator for the project within the Life Support Systems Branch, Johnson Space Center. “It is the untested integration of the CAMRAS with all of the other components (which also work fine individually) that created issues.” Those issues appear to be in the past now, and  NASA is working on the plan for final performance and reliability tests, which will run through Expedition 37/38.