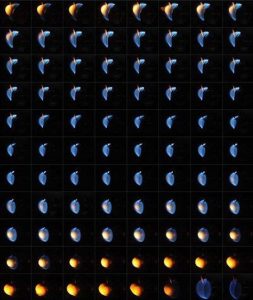 Still frames of an acrylic sphere burning as part of an experiment aboard the International Space Station. Shooting nitrogen at the flame temporarily dampens it, but then once the flow is stopped, the flame grows (Credits: NASA/BASS).

It burns at lower temperatures and more slowly in microgravity.  Some of the extinguishers designed to put it down can actually facilitate its spread and growth when used in space. The properties of fire, one of the classical natural elements, in microgravity keep scientists busy. Recently, results of research conducted by a NASA team were made available, illuminating how materials inflammable on Earth behave aboard a spacecraft. And the findings are rather disconcerting – fabric designed not to ignite in earthly conditions actually ignites in space.

“We can certainly make things not flammable on Earth, but in space, that changes,” said Dr. Paul Ferkul, the researcher who led the scientific experiments being conducted aboard the International Space Station (ISS). The fabric used during these experiments contained a mixture of cotton and fiberglass and was similar to that used to manufacture astronauts’ clothing. “There are many materials up there like this,” Ferkul noted, “including some astronaut clothing fabric, and there’s no reason why [the results] wouldn’t apply to other materials that are similar.”

Such findings have serious implications for issues of fire safety in space. There is no guarantee that an incident similar to that of the 1997 malfunction at the Russian space station Mir, could not happen again. In 1997, a blaze flared up during a regular procedure when a cosmonaut ignited a perchlorate canister to produce oxygen to supplement the space station’s air supply. Although the fire was so hot it melted some parts of the station’s metal interior, the cosmonauts managed to swiftly gain control over it. However, questions have remained and are becoming even more pressing with the onset of commercial suborbital space flight on the horizon.

Earlier this year, NASA’s fire expert David Urban told Universe Today that fire is among the most catastrophic scenarios that can possible happen aboard spacecraft. “You can’t go outside, you’re in a very small volume, and your escape options are limited. Your survival options are limited,” he said. “Space can tolerate a much smaller fire than you can tolerate in your home. The pressure can’t escape easily, and the heat stays there, and the toxic products are there as well.” 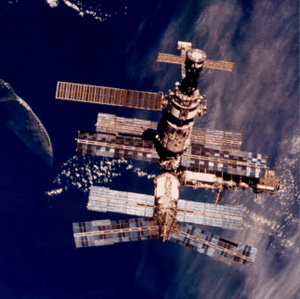 The incident aboard the Mir space station in 1997 was a tough lesson in fire safety in space (Credits: NASA).

When it comes to the recent research of Dr. Ferkul and his colleagues, the goal was to compare how the same material burns on Earth, compared with the situation aboard the ISS. They slightly changed the composition of the fabric to make is just a little flammable in terrestrial conditions. Using the Microgravity Science Glovebox (MSG) inside the station’s Destiny module, the team saw that while on Earth the samples could only burn in the direction of air flowing into the fire, in space it was able to burn both ways. The reason is the buoyancy of air – in terrestrial conditions, hot air rises and draws cooling air into the flame which regulates its speed and size. In space, on the other hand, with no sense of up or down, no such mechanism works.  “If you get just enough oxygen to the flame, the flame is able to spread happily,” Ferkul explained.

According to the researchers, if such situation a happened outside the glovebox, it could be even more dangerous as the station’s air flow circulation system would most probably stir the fire even faster. The current round of experiments is going to be concluded soon, however, follow up experiments are scheduled for the spring of 2014. The findings are not only important for the safety of future space flight but can also answer many questions related to combustion on Earth.

To learn more about fire in space, watch the following video.
[youtube http://www.youtube.com/watch?v=Chb8TViX3es]