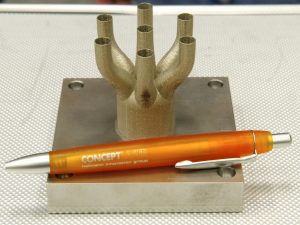 NASA is using selective laser melting (SLM), a 3D printing technology, to build parts for the next generation heavy lifter Space Launch System (SLS).  The new technology allows precision manufacturing of very complex parts starting from CAD design. “[SLM] takes metal powder and uses a high-energy laser to melt it in a designed pattern,” said Ken Cooper, advanced manufacturing team lead at the Marshall Center. “The laser will layer the melted dust to fuse whatever part we need from the ground up.”

According to Andy Hardin, the integration hardware lead for the Engines Office in SLS, the new process will save millions by reducing manufacturing time from months to weeks or days, with an effect also on safety and reliability. “Since we’re not welding parts together, the parts are structurally stronger and more reliable, which creates an overall safer vehicle,” Hardin said.

The technology will be used to build part of a J-2X engine used in the SLS second stage. The engine will be tested later this year.  If all goes well, selective laser melting will be used to manufacture parts for the first SLS, whose test flight is scheduled by 2017.

In the video below, the SLM machine in action: