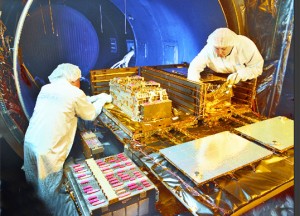 Over nine years, three Space System/Loral (SS/L) satellites experienced solar array failures. Investigations followed each failure, and each investigation came up with an incorrect root cause – or no cause at all.

Space News reports that a final definitive root cause for the failures of the 2004 Estrela do Sul/Telstar, 2011 Sul-2/Telstar 14R, and 2012 Intelsat IS-19 has now been discovered. The satellites all experienced solar array damage that limited their operational lifespans. All three were due to a too-tight seal at the end of the solar panels that precluded necessary venting combined with incomplete bonding, resulting in pressure build up in the panel followed by explosive depressurization. Both the “pinching” of these panels and insufficient bonding were due to workmanship defects according to SS/L President John Celli. Both defects had to occur in the same array in order to produce the explosive failure.

“I have asked myself many times: Why did it take three failures for us to resolve this?” Celli related in a January 4th interview. Celli says that part of the problem with earlier investigations is they just didn’t have the high tech forensic tools available today. But that is clearly not the only issue. He commented a few minutes later that “We just couldn’t believe that bonding or venting was a problem,” when considering the 2004 incident. Given such prejudgment of the investigation results, no wonder SS/L couldn’t come up with the right answer.

SS/L didn’t suffer much for its ineffective investigation; with its long and successful history, many industry insiders blamed the satellites’ Sea Launch rockets for causing the problem. The 2004 incident was never resolved, but insurance backers shrugged and payed out nonetheless and satellite operators kept signing contracts.

The second incident in 2011 had somewhat more severe repercussions. SS/L was grounded for two months and spent $13 million on an investigation, only to conclude that a hook holding the solar array’s cabling came loose, allowing the cabling to break off. While this was true, the broken hook was actually the result of the solar array explosion, not its cause.

It’s the first rule of scientific endeavour to never conflate correlation with causation. SS/L made that elementary mistake, leading to its most recent failure. The cost of the lost operational life of the three satellites totaled $422 million, not counting the cost of three investigations, launch suspensions, and ineffective rework to fix a hook that was never broken.

The message? When something goes wrong, take the time to investigate it properly. Question premises and prenotions, and don’t stop until you find an answer that fits all the facts, not just the facts you happen to take a shine to. While scheduling pressures impact everyone in the space business, shoddy investigative work will always out in the long run.