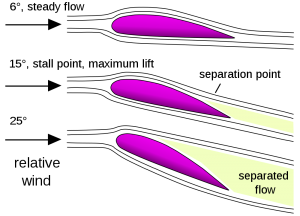 A stall is a condition in aerodynamics and aviation wherein the angle of attack increases beyond a certain point such that the lift begins to decrease. The angle at which this occurs is called the critical angle of attack. Air flow separation begins to occur at small angles of attack while attached flow over the wing is still dominant. As angle of attack increases, the separated regions on the top of the wing increase in size and hinder the wing’s ability to create lift. At the critical angle of attack, separated flow is so dominant that further increases in angle of attack produce less lift and vastly more drag.  The so called spoilers that raises on the upper part of a wing at landing cause basically a controlled stall of the wing such that the airplane will be maintained firmly on ground.

A fixed-wing aircraft during a stall may experience buffeting or a change in attitude. Most aircraft are designed to have a gradual stall with characteristics that will warn the pilot and give the pilot time to react. For example, an aircraft that does not buffet before the stall may have an audible alarm or a stick shaker installed to simulate the feel of a buffet by vibrating the stick fore and aft. The “buffet margin” is, for a given set of conditions, the amount of ‘g’, which can be imposed for a given level of buffet. The critical angle of attack in steady straight and level flight can be attained only at low airspeed. Attempts to increase the angle of attack at higher airspeeds can cause a

Depending on the aircraft’s design, a stall can expose extremely adverse properties of balance and control, in particular in a prototype. 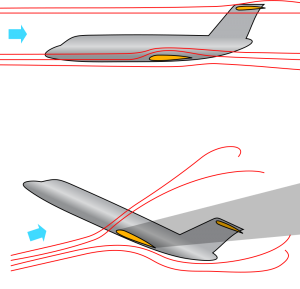 The deep stall affects aircraft with a T-tail configuration.

A deep stall (or super-stall) is a dangerous type of stall that affects certain aircraft designs, notably those with a T-tail configuration. In these designs, the turbulent wake of a stalled main wing “blankets” the horizontal stabilizer, rendering the elevators ineffective and preventing the aircraft from recovering from the stall.

Effects similar to deep stall had long been known to occur on many aircraft designs before the term was coined. Gloster Javelin WD808 was lost in a crash on June 11, 1953 to a “locked in” stall and Handley Page Victor XL159 was lost to a “stable stall” on March 23, 1962. The name “deep stall” first came into widespread use after the crash of the prototype BAC 1-11 G-ASHG on October 22, 1963, killing its crew. This led to changes to the aircraft, including the installation of a stick shaker to clearly warn the pilot of the problem before it occurred. Stick shakers are now a part of all commercial airliners. By sheer coincidence, also on October 22, 1963, a Tu-134 was lost in a flight test due to the same cause. Nevertheless, the problem continues to cause accidents; on June 3, 1966, a Hawker Siddeley Trident (G-ARPY)[ was lost to deep stall; deep stall is suspected to be cause of another Trident (G-ARPI) crash on June 18, 1972; on April 3, 1980, a prototype of the Canadair Challenger business jet entered deep stall during testing, killing one of the test pilots who was unable to leave the plane in time and on July 26, 1993, a Canadair CRJ-100 was lost in flight test due to a deep stall. It has been reported that a Boeing 727 entered a deep stall in flight test, but the pilot was able to rock the airplane to increasingly higher bank angles until the nose finally fell through and normal control response was recovered. A 727 accident on December 1, 1974 has also attributed to a deep stall. [Source Wikipedia]