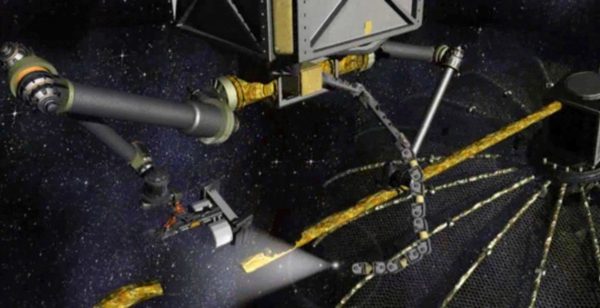 On January 22, DARPA released a video showing the progress of it’s Phoenix project. Phoenix is intended to be a satellite scavenger, removing parts from defunct orbiting satellites to use to build new satellites or extend operations for existing spacecraft.

While Phoenix could help improve the space debris problem by reducing the mass of scavenged spacecraft, DARPA has clearly indicated that debris is not the primary objective. “The fundamental precept is cost,” says David Barnhart, DARPA’s program manager for Phoenix. “That is the bottom line: is there a way that we can completely rethink the cost-calculus of how satellites are put together?”

Watch Phoenix’s animated ballet below as it grabs, unscrews, and cuts parts off of a target satellite. Inset are images of the real systems currently in various stages of design and testing.