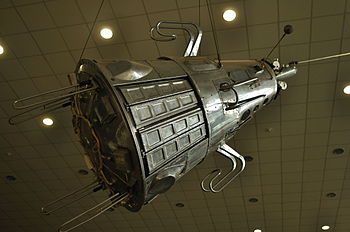 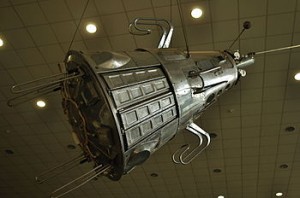 A model of Sputnik 3 hangs in the Konstantin E. Tsiolkovsky State Museum of the History of Cosmonautics (Credits: Енин Арсений).

On May 15, 1958, the USSR succeeded in launching its third satellite, Sputnik 3, into orbit. Originally known as Object D, Sputnik 3 had been intended as the first artificial satellite, equipped with twelve instruments targeting the upper atmosphere and energetic particles. Alas, Object D’s instruments and telemetry system delayed its launch, so the simpler Sputnik 1 was launched in its place.

On May 15, 1963, NASA’s hot shot, speed demon astronaut Gordon Cooper launched on the final mission of the Mercury program. He flew Faith 7 for  22 orbits over 34 hours – a record for the US, although well behind the Soviet record at the time of four days.

On May 14, 1973, NASA’s very last Saturn V hoisted into orbit the US’s first space station, Skylab. Skylab had a challenging beginning, with a critical micrometeoroid shield being ripped off and one of two solar arrays severely damaged en route. On May 25, the first crew was launched to Skylab, with an updated primary mission: to rescue the fledgling station.

Here is a look at the official film reels from Gordon Cooper’s Mercury Faith 7 flight: