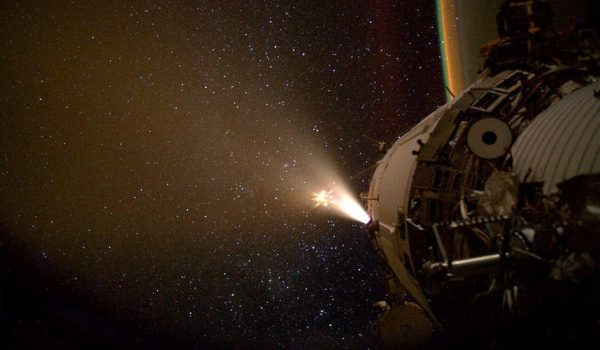 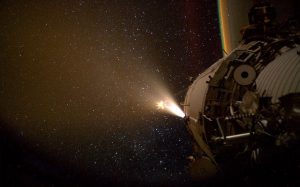 In the early hours of October 2nd, ESA’s ATV-3 cargo ship destructively reentered Earth’s atmosphere where it proceeded to break up, its remnants falling over the Pacific Ocean.

“Everybody is happy here,” said Jean-Michel Bois, Head of the ESA Mission Operations Team at ATV Control Center in Toulouse. “For sure it’s the end of a rare technical and human adventure, with hours spent in the control centre, nights and days, to monitor this incredible vehicle.”

The expendable Automated Transfer Vehicle, dubbed “Eduardo Amaldi” finished its 6 month campaign early on Wednesday morning as it burned up on reentry after its delayed departure from the International Space Station. It was initially scheduled for reentry on the 27th September, but the manoeuvre was postponed due to an error during the planned undocking on the 25th. The error was found to have resulted from the incorrect vehicle code being relayed through the system and consequently, the departure from ISS occurred on the 28th. The Reentry Breakup Recorder began recording as ATV-3 hit Earth’s atmosphere and has been safely recovered. Data from the recorder will help better predict future re-entries and improve modelling efforts. 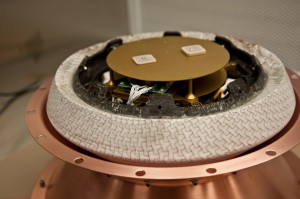 The ATV series of vehicles provide the ISS with supplies and experiments, as well as assisting in the performance of  altitude corrections for the station. Two other vehicles have been launched so far, named “Jules Verne” and “Johannes Kepler” and ATV-4, named “Albert Einstein” is due to launch in 2013.

The ATV resupply missions are ESA’s contribution in kind to the upkeep of the International Space Station. The main control centre for these missions is situated in Toulouse. The vehicle itself weighs over 20 metric tons and is capable of transporting fragile loads as well as fluids. Each vehicle can only be used once since it is destroyed on reentry. Five ATV vehicles have been scheduled for resupply missions.

ESA is contracted to provide two more vehicles before 2015. As for the team at Toulouse, Jean-Michel offered this final concluding remark: “Now, no break in activities: ATV-4 starts tomorrow morning for ATV-CC, with preparations for the new dedicated mission configuration.”