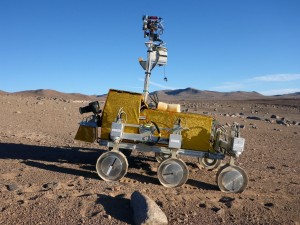 In early October 2013, the Atacama Desert became the site of a Mars simulation for a week, as a team of scientists and engineers visited the area to test out their prototype Mars rover.

The test site is located close to European Southern Observatory’s (ESO) Paranal Observatory and was selected due to its harsh climate and its physical resemblance to the red planet. Additionally, the Atacama Desert is known for its virtually sterile soil, largely due to the lack of moisture in the region: this makes the area particularly suitable for simulating the lifeless Martian environment.

The recent trials in Chile have featured a rover named Bridget (provided by Astrium, Stevenage in the UK), which is part of the SAFER field trials (Sample Acquisition Field Experiment with a Rover). ESA’s 2018 ExoMars mission is acting as the reference mission for the trial.

The project aims to give the science team first-hand experience of remotely operating a rover, and acquiring field data from the three instruments during a field trial. The rover operation will be run so as to be as near to a real mission as possible for the science team and the remote control centre. Parallel testing is taking place from the UK’s remote control centre based at the Satellite Applications Catapult Centre in Harwell.

The three instruments on trial are CLUPI (a close-up imager), which is the equivalent of a geologist’s hand lens used for examining the fine details of rocks, a PanCam (panoramic camera) emulator called AUPE-2, and a ground penetrating radar called WISDOM, which will provide a detailed view of the Martian subsurface structure.

To further add to the realism of the simulated mission, the team also used an unmanned aerial vehicle (UAV or drone) to survey the area from the sky, providing a digital elevation model to assist the team with the rover’s navigation. This is similar to the way in which data is acquired from Mars orbit.

It is not the first time that the harsh Chilean landscape has been used as a proving ground for Martian robotic explorers — an earlier rover visited Paranal in June 2012. And in June 2013 Carnegie Mellon University and the SETI (Search for Extraterrestrial Intelligence) Institute sent a solar-powered rover named Zoe to the region to test instruments used for the detection of microbes in extreme environments. 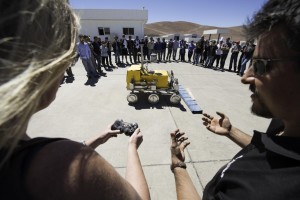 The SAFER field trial is being overseen by ESA’s Directorate of Technical and Quality Management, with its international industrial team led by the UK Science and Technology Facilities Council’s RAL Space. The team includes Astrium, Aberystwyth University, Scisys, Joanneum Research in Austria, Space Exploration Institute in Switzerland, the Mullard Space Science Laboratory of University College London, the University of Leicester, and the LATMOS research lab of the Centre National de la Recherche Scientifique in France.

The activity is being funded by ESA’s Basic Technology Research Programme, with additional co-funding from the UK Space Agency.

This article appeared originally on the European Southern Observatory website.