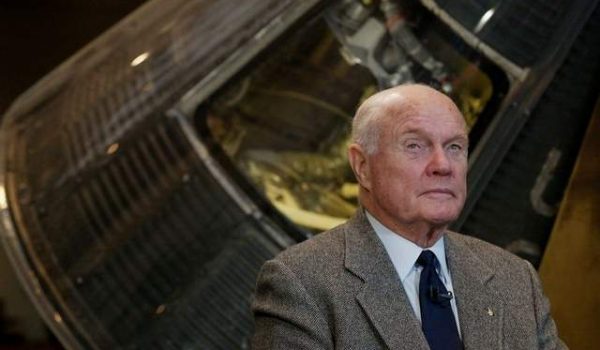 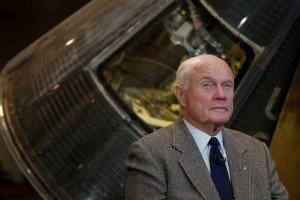 Former astronaut and US Senator John Glenn posing with the Friendship 7 capsule at the Washington DC Air and Space Museum in 2002 (Credits: Gannett News Service)

On May 1st, it was announced that John Glenn, the first American to orbit the Earth, will be receiving the Presidential Medal of Freedom. The announcement comes roughly three months after NASA celebrated the 50th anniversary of his historic flight. Twelve other Americans were selected to receive the medal, including musician Bob Dylan and Pulitzer Prize-winning novelist Toni Morrison.

US President Barack Obama stated that each of the honorees has “made a lasting contribution to the life of our nation. […] They’ve challenged us, they’ve inspired us, and they’ve made the world a better place. I look forward to recognizing them with this award.”

The award makes Glenn one of a small group of astronauts that have received the award. Apollo 11 astronauts Neil Armstrong, Buzz Aldrin, and Michael Collins were given the award when the returned from their historic moon landing in 1969. Apollo 13 astronauts Jim Lovell, Fred Haise, and Jack Swigert, and Apollo lunar module pilot Ed Mitchell, were also given the award after returning to Earth. A number of Apollo ground controllers have also been given the award, including Sig Sjoberg, Glynn Lunney, Milt Windler, Gerry Griffin, and Gene Kranz.

According to the White House, the Presidential Medal of Freedom is awarded for “meritorious contributions to the security or national interests of the United States, to world peace, or to cultural or other significant public or private endeavors.” Glenn is no stranger to such awards, having been awarded the Congressional Space Medal of Honor in 1978. In November 2011, he and the Apollo 11 crew also received the Congressional Gold Medal which, along with the Presidential Medal of Freedom, is considered the highest possible civilian honor in the United States. 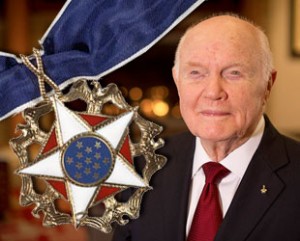 John Glen with the Presidential Medal of Freedom (Credits: NASA)

On February 20th, Glenn was recognized at the 50th anniversary celebration of his flight aboard the Friendship 7 spacecraft. “John Glenn helped this nation forge a path to a brighter future with greater capabilities,” said NASA chief Charles Bolden.

In addition to recognizing his role in the American space program, the White House announced that the award was also to highlight Glenn’s political achievement as a Senator, including his sponsorship of the 1978 Nonproliferation act, and serving as chairman of the Senate Government Affairs committee from 1987 to 1995. He retired from Congress in 1999.

John Glenn has been an honorary member of IAASS since 2006.