Very little is still known about Long March 4C rocket that blasted off from the Taiyuan Satellite Launch Centre in Shanxi at 18:55 UTC on September 1st, 2:55 Beijing time, to send the Gaofen-10 satellite into a Sun Synchronous Orbit, departing the military launch site to the south. Official news media have not disclosed information on the success or failure of the launch. CCTV broadcast footage of the rocket taking off from the launch pad but did not carry any follow-up reports, which indirectly confirmed the mission’s failure.

The police department of neighboring Shaanxi province posted photos on its social media account of a search and recovery mission for debris on Thursday, in which the launch was dubbed a “failure”. The entry was later removed from Weibo.

The first stage debris were found in the expected area around 600 Kilometers from the launch site, confirming that the first stage performed as planned and separated at the expected energy. Further downrange, about 1,050 Kilometers from Taiyuan, remains of the rocket’s protective payload fairing were found to have impacted in a village located right in the center of the expected fairing drop zone. This confirmed that flight was nominal until late in the second stage burn. 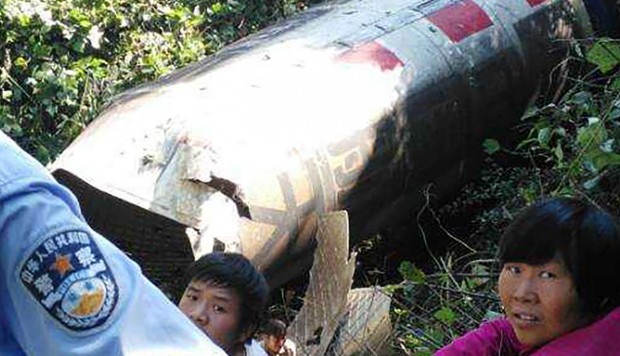 The problem reportedly occurred with the 3rd rocket stage. A possible mechanical glitch caused the satellite to lose speed and plunge back to earth, where most of it burned up re-entering the atmosphere, according to an early report published by aihangtian.com, a website built and run by Chinese professional astronautic experts and space enthusiasts.

The failed launch was the first of 13 space launches planned this year, and the 235th flight of the Long March series rockets. The last Long March failure happened in December 2013 with the CBERS 03 satellite on board. According to aihangtian.com, in recent years, China’s space agencies have attached great importance to quality improvement programs of aerospace products, to achieve world-class level.

The Gaofen series satellites are designed to give China a global network of earth observation satellites with high-definition, all-weather, 24-hour intelligence gathering capabilities for military and civilian users by 2020. The network is designed to be able to monitor any spot on earth. The Gaofen-10 carried the newest generation of optical sensors developed by Chinese researchers. It was to operate in a Sun-synchronous orbit and cross the equator 12 times a day.