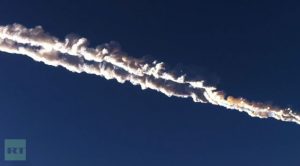 The trail of the fragment over Chelyabinsk (Credits: RT.com and YouTube user Gregor Grimm).

Officials say that the chaos began after a large meteorite disintegrated above the Ural mountain range and partially burned up in the lower atmosphere, resulting in a blast wave, emitting light and resulting in smaller fragments falling down to the ground throughout the Chelyabinsk region.  Unofficial reports thought to come from the Russian military are claiming that the military had intercepted the asteroid with a missile high in the atmosphere, resulting in the fragmentation.  This is still unconfirmed.

“It was most likely of iron nature as it penetrated so far through the atmosphere.  However, we still don’t have the exact data on the debris,” said Valeriy Shuvalov of the Institute of Geosphere Dynamics at RIA Novosti.

The objects in the skies were seen over the city of Chelyabinsk, 1500 km east of Moscow, and in the Sverdlovsk region but the traces from falling fragments have been also seen in Tyumen and in Yekaterinburg, 200 km north of Chelyabinsk, a witness told the Reuters news agency.

RT.com reported that a meteorite fragment “crashed into a wall near a zinc factory, disrupting the city’s internet and mobile service”. 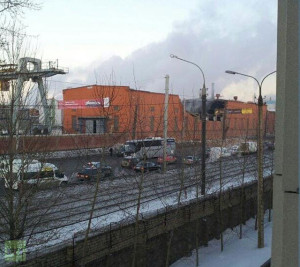 A local zinc factory was the worst-hit, with some of its walls collapsed (Credits: RT.com).

Sources do not agree on the number of injured from broken glass and debris created by the explosion’s shockwave.  According to BBC, reporting interior ministry sources, at least 250 people were injured initially after the meteor strike, but the count is growing and an update from the interior ministry said that over 500 people had sought medical treatment after the blasts, and at least three had been hospitalized in serious condition.

According to reports, the Mayak nuclear complex, one of the world’s biggest nuclear facilities located 72 km north-west of Chelyabinsk,  was not affected by the incident.

Although many websites speculated on a possible connection with the close passage of asteroid 2012 DA14, European Space Agency experts said that it is just a coincidence and there is no relation to the asteroid which is expected to pass close to the Earth later on today. Also coincidentally, today is the day that the UN COPUOS (United Nations Committee On the Peaceful Uses of Outer Space) working group on Asteroid Protection is being held in Vienna.

Prof Alan Fitzsimmons, of the Astrophysics Research Centre at Queen’s University Belfast, offered further evidence to  BBC News, regarding the lack of connection between 2012DA14 and the Ural meterorite, stating that “”One reason is that 2012 DA14 is approaching Earth from the south, and this object hit in the northern hemisphere.”

The SEVIRI instruments aboard EUMETSAT’s Meteosat Second Generation caught the vapour trail left by the meteorite.

Below, a composition of videos taken during the meteorite strike: