Graduating from Admiral Farragut Academy in 1956, Axel M. (Skip) Larsen entered the U.S. Naval Academy (USNA) Annapolis, MD. Skip graduated from the USNA in the spring of 1960 with a B.S. Degree in Engineering and was commissioned a Second Lieutenant in the USAF. After training as a Navigator (Harlingen, Texas), training in Electronic Countermeasures (Sacramento, CA), training in Survival (Reno, NV), and training in the B-52 (Merced, CA), Lt. Larsen was assigned to a USAF B-52 H Ready Crew in Sault Ste Marie, Michigan.

By 1967, U.S. Air Force Navigator Captain Larsen was a Senior Electronic Countermeasures Officer and was assigned to a Select (S) B 52H crew. He had accumulated 1800 hours of flight time and was also an ECM Standardization and Evaluation Officer responsible for evaluating other B-52 ECM officers.

Hearing the call of NASA in Houston, Texas, Skip Larsen left the USAF and became a NASA Apollo Flight Controller in 1967.  Between the fifteen years from 1967 and 1982, Skip was an Operation and Procedures officer for Apollo 8, 10, Skylab TNG Apollo 15, Lead Skylab Corolary Experiment Officer for Skylab 1, 2, and 3, and Lead ASTP Experiments Officer. He was also a Shuttle Program Integration Manager.

In 1983 he moved to Virginia to work for Orbital Science Corporation on the Transfer Orbit Stage Program, ultimately becoming Program Manager. Both vehicles were flown with 100% success.

From 1971 to 1985 Skip also flew in the Texas Air Guard, flying air defense missions from Ellington Field in the F-101 (1000 hrs) for ten years and the F-4 for five years (400 hrs). Most of his missions were flown at night. Skip retired as a Lieutenant Colonel.

In 1990 he returned to NASA JSC to be Chairman of the Shuttle Payload Safety Review Panel for 15 years, until 2006. During this time as Chairman his efforts were concentrated on chairing payloads safety reviews for SpaceLab, Spacehab, Hubble Space Telescope Service Missions, Mir experiments, and International Space Station payloads from the United States, Europe, Russia, Japan, and Canada.

Skip Larsen was co-editor of the book “Safety Design for Space Systems” (2009), the first of its kind also translated in Chinese. Skip was recognized with the “Major General K.L. Berry” Award for life saving, the NASA Silver Snoopy Award, the NASA Exceptional Service Medal, and numerous NASA Group Achievement Awards. Skip received the IAASS “Vladimir Syromiatnikov Safety-by-Design” Award in 2008, with the following motivation:

“Dear Skip, your vast and outstanding space technical knowledge and experience, your striving for excellence and continuous learning in safety engineering, your dedication in thoroughly reviewing all design and operational aspects of so many Shuttle and ISS payloads have been essential in making many scientific programs safe and successful, while setting a high standard of performance and recognition for the space safety profession. Your vision, cooperative style and method of work have encouraged and supported the dissemination of the space safety engineering culture internationally, and within the design teams”.

Skip Larsen was Founding Member and Honorary Member of the International Association for the Advancement of Space Safety. Skip Larsen passed away in Houston on Thursday, November 17, 2016 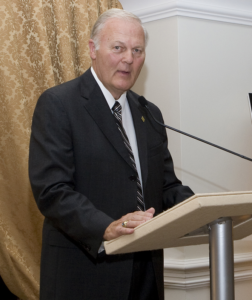