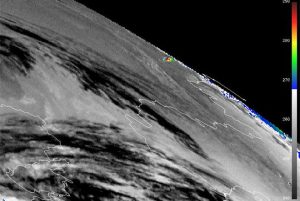 New facts and figures have emerged with regards to the meteor that detonated above the Ural region in Russia on February 15th.

The current casualty toll stands at over 1200, although thankfully, most are small injuries related to flying glass shards which resulted from windows destroyed by the sonic boom.  This toll now ranks as the highest amount of injuries ever caused by a body falling from space.  Approximately 200,000 square meters of window glass is being replaced, mostly in the city of Chelyabinsk.  Glaziers have been flown in from neighbouring cities to assist with repairs.  Russian news agency RIA Novosti has reported that some residents had deliberately smashed windows of their homes in order to claim compensation, although this was quickly denied by Regional Governor Mikhail Yurevich.  The damage so far has been estimated at $30 million USD.

In terms of the physical characteristics of the meteor, there seems to be a certain amount of confusion with regards to the mass of the object.

The Russian Academy of Sciences had first estimated the mass of the object to be 50 tons before entering the atmosphere, but later reduced the estimate to 10 tons.  The academy stated that the object was a “few meters” in diameter, and was likely to be made of iron.  Russian sources have stated that the energy released in the explosion was equivalent to that of a few kilotons of TNT.

NASA, on the other hand, has finally settled on a 17 meter diameter, with a 10,000 ton mass, most likely to be of a less-dense chondrite variety.  NASA has reported that the energy released was closer to an equivalent of that from 500 kilotons of TNT.

That is quite a significant variation. So who is correct?  Without recovering meteorite fragments, or information of its shape, it is difficult to say, but we can do a back of the envelope test. Assuming a perfectly spherical shape for both scenarios, the following can be said:

In conclusion, both estimates are in the correct ball-park in terms of the materials assumed present, and the diameters quoted.  As stated, until conclusive evidence presents itself in the form of a recovered fragment, we may not know which estimate is closer to the mark.  We do, however,  have infrasound data that has been collected from various nuclear weapon detection systems around the world, and for the moment, that data seems to point to an energy release in the upper ranges, which would indicate that NASA may have got it right.

Divers had been sent to search for the elusive meteorite fragments at Chebarkul Lake, where a mysterious hole had been discovered in the ice.  However, by Saturday February 16th, the Vice-Govenor of Chelyabinsk had announced that the search for fragments had been called off at the site, and stated that the hole in the ice had “formed because of a different reason.”

The last few days have been a time for reflection from Russian politicians and religious leaders alike. Zlatoust Feofan, a cleric from the Russian Orthodox Church suggested that the meteor was “the Lord’s message to humanity.” The Russian government’s foreign affairs committee chief Alexei Pushkov interpreted the “message” differently, saying “Instead of fighting on Earth, people should be creating a joint system of asteroid defence.”  Pushkov continued, encouraging a multilateral drive for asteroid protection: “Instead of creating a (military) European space defense system, the United States should join us and China in creating the AADS – the Anti-Asteroid Defense System.”

It wouldn’t be the first time that Russia has considered measures for mitigating threats from asteroids.  In 2009, Anatoly Perminov, the Director General of Roscosmos at the time, announced that the Russian space agency was considering a mission to divert asteroid 99942 Apophis, which is expected to pass perilously close to Earth in 2029, and again in 2036.  In 2012, Roscosmos announced that they plan to attach a tracking beacon onto Apophis, to enable scientists to better monitor its trajectory.

“We should pay several hundred million dollars and build a system that would allow us to prevent a collision,” stated Perminov in 2009, “rather than sit and wait for it to happen and kill hundreds of thousands of people.”

Many years ago, Sci-fi author Larry Niven pointed out that “the dinosaurs became extinct because they didn’t have a space program.”  It is a quote that has been paraphrased by astrophysicist Neil deGrasse Tyson, and head of Planetary Resources, Chris Lewicki.

Maybe in light of the recent events in Chelyabinsk, Cuba, and California, the governments of the space-faring nations will start to take that quote a little more seriously.

Below, engineers at AGI have created a simulation showing the trajectories of both the Russian meteor, and asteroid DA14: