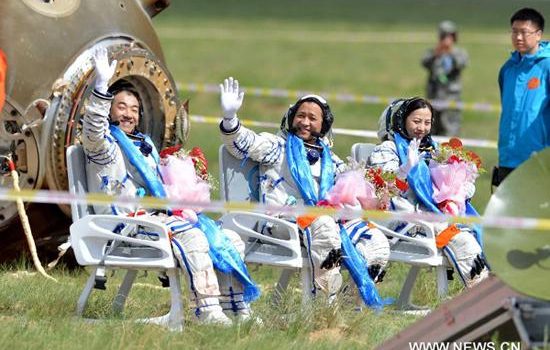 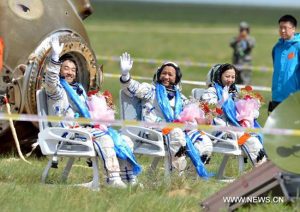 Taikonauts Nie Haishheng, Wang Yaping and Zhang Xiaoguang wave their hands for the cameras, just after the landing  (Credits: news.cn).

The Shenzhou-10 spacecraft carrying three taikonauts has safely landed on June 26, after a 15-day mission to the Tiangong-1 orbiting laboratory. The crew composed of mission commander Nie Haisheng, Wang Yaping, who became the second Chinese woman to fly in space, and Zhang Xiaoguang.

‘‘Space is our dream, the fatherland is our home. Thanks to all compatriots who supported us and best wishes for the wealth and success of our fatherland and the ever greater happiness of our people,’’ said Nie back on Earth.

The spacecraft landed by parachute in Inner Mongolia, an autonomous region of China, at 8:08 am local time.  As the hatch opened, the three taikonauts began smiling and waving for the national television cameras. Manned space program director Zhang Youxia has declared the mission a complete success, and offered assurance that the crew was in perfect health.

Shenzhou-10 and its crew performed the longest manned space mission in China’s history. During the 15 days aboard Tiangong-1, Nie, Wang and Zhang executed a variety of experiments, conducted a microgravity science lesson beamed live for 60 million Chinese schoolchildren, and had a chat with the Chinese President, Xi Jinping. The Chinese leadership has stressed the importance of the mission as a milestone in the development of a broader space program aimed for further achievements. The program is also a significant source of national pride and according to some commentators it is helping Xi’s leadership consolidation inside the Chinese Communist Party.

Shenzhou-10 blasted off on June 11, automatically docking with Tiangong-1 two days later. The spacecraft briefly undocked on June 22 to test the manual docking and departed fully from the laboratory on June 24, initially flying around Tiangong-1 for a rendezvous test.

Tiangong-1 will re-enter into the atmosphere within the next few months, but China has already made plans for its replacement. The first “Heavenly Palace” is due to be replaced in 2015 by Tiangong-2, which will have a mass of approximately 13 tons and a length of 99 meters.

Below, the taikonauts depart the spacecraft, after a successful landing.