On the night of August 30th, a pressure drop was experienced on the International Space Station (ISS). The crew isolated the leaking volume by sequentially sealing the compartments of the station and the vehicles docked. A hole of about 2 mm diameter was found in the shell of the Soyuz MS-09. In the evening of the same day the hole was sealed with several layers of epoxy resin, and the ISS pressure soon stabilized. On August 31st the crew strengthened the patch with an additional layer of sealant. 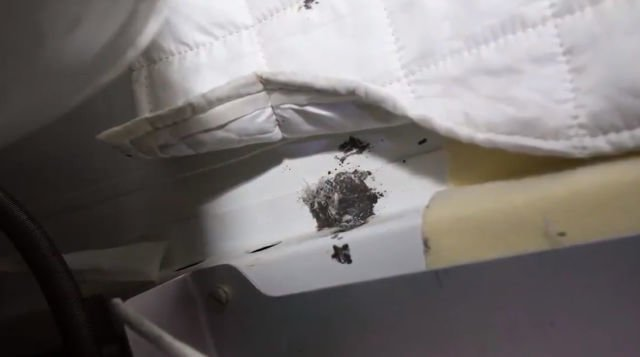 The ultimate solution was to fill the hole with an epoxy-based sealant. Photo Credit: NASA

Following the hole discovery, RSC-Energia is checking all Soyuz and Progress vehicles on ground, starting with those at Korolev City in the Moscow region, and then next week in Baikonur. There are three vehicles: Soyuz MS-10 and Progress MS-10 scheduled for launch in October, and Soyuz MS-11, which will be launched in December. There are also other vehicles being integrated, which will be launched in 2019. In mid-September, the cargo Progress MS-11 will be completed, which will be launched to the ISS on February 7th. The manufacturing of a Soyuz or Progress takes about two and a half years, so there are several vehicles at different stages of assembly that need to be checked. Meanwhile, the head of Roskosmos Dmitry Rogozin is not ruling out the possibility that the hole was deliberately drilled on orbit. He mentioned other signs of damage nearby and that the hole appeared drilled with uncertain hand.

“We are considering all possibilities, although we have already eliminated a meteorite impact, because the damage clearly originated from inside the ship’s shell.” (…) It could be a production error or some deliberate action. Where was it made? On Earth, or orbit? “- Rogozin told Interfax. State Duma Deputy and former cosmonaut Maxim Suraev told a Moscow radio station that in his opinion one of the crew members may have drilled the hole to provoke an early return of Soyuz. “Maybe someone on board is very tired and wants to return.” “Someone psychologically stressed and completely sick and tired” Suraev suggested. He added that there are drill bits on board the ISS and that although there are several cameras not all sectors of the station are covered, and the cameras do not work constantly. The news agency TASS, citing a source from industry, suggested that the Soyuz MS-09 could have been damaged during testing at Baikonur. Earlier, the news agency RIA Novosti, suggested that the employee who had accidentally drilled the extra hole, tried to seal it with a special glue, so that no leakage was witnessed during leak-tightness ground checks before launch. However, two months later as the glue aged it way may have been squeezed out of the hole while on orbit.