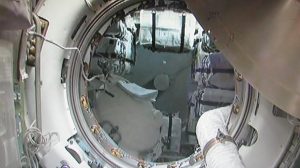 The hatch of the newly docked Autonomous Transfer Vehicle (ATV-4) has finally been opened on June 18, after a delay involving a suspected build-up of mold or bacteria in three cargo bags.

“Things sometimes do not go as planned,” said Roland Luettgens, Volare mission director. “The opening of the supply ferry’s hatch was planned for Monday (June 17). Before opening the door of the spacecraft though, many things need to be checked to ensure everything is set correctly. We decided to postpone opening ATV-4’s hatch to today (June 18).”

The opening has been postponed because mission managers had to discuss whether the crew needed to disinfect the three bags. Alberto Novelli, ATV-4 mission manager later explained that the hatch opening had to be rescheduled due to ongoing discussion between Russia and NASA on the exact content of the initial crew ingress operations. The “No go” call was taken by Mission Control Moscow, who were concerned with the build-up of mold inside the bags. Although the level of contamination was not posing any risk to the crew members, the Russian team was concerned about the protection of the atmosphere aboard the International Space Station (ISS). According to Spaceflight101.com, current plans involve the crew using fungistat kits to clean the bags before the transfer. A fungistatic agent is a substance designed to impede the growth of fungi.

Commander Pavel Vinogradov and Flight Engineer Luca Parmitano spent June 17’s morning performing leak checks of the docking interface at the aft end of the Zvezda service module where “Albert Einstein” is docked. The operations were necessary to make sure the connection between the two vehicles was properly sealed. They also used fans and filters to remove particles and contaminants from the atmosphere inside the ATV-4 to preserve the ISS environment.

The first piece that will be moved inside the station by Parmitano is a spare water pump assembly.. The pump, mounted on a special configuration on ATV-4,’s cargo bay, was filled with water prior to launch. Parmitano will have to move and install the pump assembly into the Columbus module. The piece is part of the Columbus module’s thermal control system which cools all systems and payloads inside the science module.

Below, footage of the first ingress into ATV-4 (Courtesy of ESA).