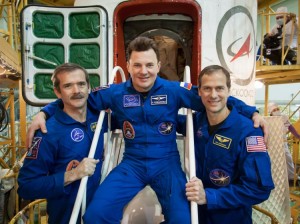 Expedition 34 supplement Chris Hadfield, Roman Romanenko, and Tom Marshburn are all avid guitarists. While Hadfield will perform with Barenaked Ladies this trip, Romanenko got his own jamming in with U2 during a 2010 tour. Marshburn is more of a classical guitarist (Credits: NASA).

Canadian astronaut Chris Hadfield blasted off for his third space mission, from Baikonur Cosmodrome in Kazakhstan, in a Soyuz capsule this Wednesday morning, 19th December 2012.

Hadfield’s duties on this mission will include performing robotic tasks, operating Canadarm2, and taking part in two space walks. Apart from technical tasks, Hadfield has two more things on his agenda: celebrating his wedding anniversary in space and guitar jamming in space.

Astronauts always have the opportunity to take some small personal items with them, and Hadfield put a lot of thought into his:  a new wedding ring, as a constant reminder of his wife Helene. “Something that can remind you on a daily basis, something that is both personal and also that is not just a collector’s item,” said Hadfield. “We thought about jewellery, earrings and a necklace, but it just seemed to make sense – so I’m flying a ring for my wife.” 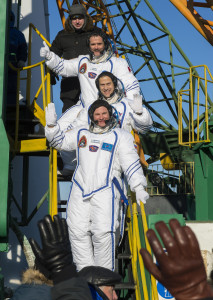 From top to bottom, Chris Hadfield (CSA), Tom Marshburn (NASA), and Roman Romanenko (Roscosmos) wave farewell from the bottom of the Soyuz rocket at the Baikonur Cosmodrome. The trio will arrive at ISS on December 21 (Credits: NASA).

While Hadfield couldn’t take his wife with him to space, there was no reason for him to leave his music behind. During this mission, Hadfield will be performing some guitar jams.  He and Ed Robertson from the band Barenaked Ladies will be collaborating to write, record, and perform a song during the mission. The song will be premiered on CBCMusic.ca in March 2013, with Hadfield  performing from aboard ISS accompanied by Robertson and the Barenaked Ladies on Earth along with a high school choir.  “I want to communicate the incredible experience of being in space—what it’s like to launch on a rocket and live on the International Space Station,” said Hadfield.

Hadfield will become the first Canadian to command the International Space Station in the latter part of this trip. His prior space travel includes visits to Russian Space Station Mir in November 1995, and to ISS in April 2001 when he performed two space walks. Hadfield will be staying in space for five months, and the social aspects of his mission will surely increase public awareness of space travel.