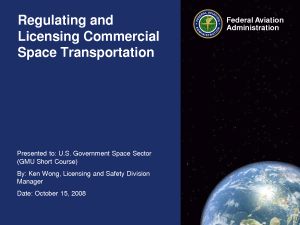 On February 1, the US Congress released the final version of a Federal Aviation Administration (FAA) reauthorization bill. Hidden among the labor provisions is a three year extension of the Commercial Space Launch Ammendments Act (CSLAA). CSLAA was originally passed in 2004 and was set to expire at the end of 2012.  The act restricts the ability of the FAA to regulate safety for crew and flight participants of FAA licensed spaceflight launches. Commercial spaceflight companies had supported extension of the provision. A joint statement from the Congressional conference managers noted that “Nothing in this provision is intended to prohibit the FAA and industry stakeholders from entering into discussions intended to prepare the FAA for its role in appropriately regulating the commercial space flight industry when this provision expires.” For now, the FAA’s role is one of protecting the uninvolved public from potential spaceflight fall-out. The only requirement with respect to crew and participants of the flights is that they be duly informed of the risks. The FAA’s Office of Commercial Space Transportation is tasked with protecting “the public, property, and the national security and foreign policy interests of the United States during commercial launch or reentry activities.” Some in Congress have argued that with the FAA’s limited funding, it is more important for it to focus on its core task of  air traffic regulation rather than diverting attention to the as yet miniscule commercial space industry. In 2010, the FAA granted just 4 licenses for commercial satellite launches. No crewed commercial spaceflight operators have sought licenses at this time. The conference version of the bill will be sent to both houses Congress for a final vote and is expected to pass.