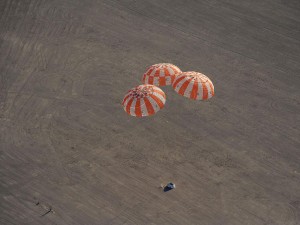 NASA engineers have demonstrated the agency’s Orion spacecraft can land safely if one of its three main parachutes fails to inflate during deployment.

The test was conducted Tuesday in Yuma, Ariz., with the parachutes attached to a test article. Engineers rigged the parachutes so only two would inflate, leaving the third to flag behind, when the test capsule was dropped from a plane 25,000 feet above the Arizona desert.

“Today is a great validation of the parachute system,” said Chris Johnson, a NASA project manager for Orion’s parachute system. “We never intend to have a parachute fail, but we’ve proven that if we do, the system is robust for our crew to make it to the ground safely.”

Orion’s parachutes will perform in ways no landing system for a spacecraft carrying humans has been required to do before. Because Orion will return to Earth from greater distances, it will reenter Earth’s atmosphere at speeds of more than 20,000 mph. After re-entry, astronauts will rely on the parachutes to slow the spacecraft for a gentle splashdown in the Pacific Ocean. 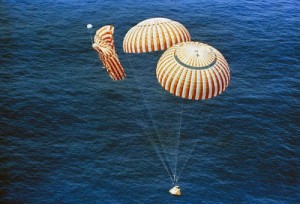 When a parachute fails: Apollo 15 splashes down on two chutes (Credits: NASA).

This 21,000-pound capsule needs only two main parachutes and one drogue parachute. But NASA spacecraft, particularly those carrying humans, are designed to keep working when something goes wrong. So, Orion will be equipped with three main parachutes and two drogues, providing each system one backup parachute.

In December, engineers simulated a failure of one of the drogue parachutes in a test that ended with a safe landing, proving the system design is valid.

Tuesday’s test was the eighth parachute engineering development drop test. The next is scheduled for May. The system also will be put to the test in 2014 when Orion makes its first flight test. During the mission, an uncrewed capsule will travel 3,600 miles from Earth, farther than any spacecraft designed to carry humans has gone in more than 40 years.