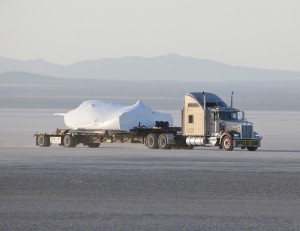 Dream Chaser, the crewed orbital and suborbital vertical-takeoff, horizontal-landing lifting-body vehicle, has been delivered to NASA’s Dryden Flight Research Center in Edwards, California as of May 15. The vehicle, being developed by Sierra Nevada Corporation’s (SNC) Space Systems, will undergo a series of tests on its flight and runway landing system.

“This will be the first full scale flight test of the Dream Chaser lifting body and will demonstrate the unique capability of our spacecraft to land on a runway,” said Jim Voss, SNC’s vice president of Space Exploration Systems. “Other flight tests will follow to validate the aerodynamic data used to control the vehicle in the atmosphere when it returns from space.  This is a huge step forward for the SNC and NASA teams towards providing our nation with safe and reliable transportation to the International Space Station.”

Tests includes runway tow, ground resonance, and captive carry flights. The runway tow test consists of a truck towing the vehicle down a runway to validate performance of the nose strut, brakes, and tires. During the captive-carry flights, the space place will be carried by a heavy-lift Erickson Skycrane helicopter to examine the loads that will encounter during flight. Only after the completion of these tests will the Dream Chaser perform its first autonomous free flight Approach and Landing Test (ALT).  In 1977, Space Shuttle Enterprise conducted a similar milestone test at Dryden.

Meanwhile, several NASA astronauts were at the Langley Research Center in Hampton, Virginia, to fly simulations of a Dream Chaser approach and landing. Their efforts will help evaluate the spacecraft’s subsonic handling in a number of different atmospheric conditions to assess its guidance and navigation performance. The Dream Chaser vehicle is based on Langley’s Horizontal Lander HL-20 lifting body design concept developed between the 80s and 90s. For the past six years, SNC and Langley worked together to tune the spacecraft design and Langley’s engineers also developed a cockpit simulator.

Dream Chaser’s project and the tests are conducted under the NASA’s Commercial Crew Program (CCP). The contract aims to facilitate U.S. companies’ in the development of spacecraft and rockets that can guarantee the U.S. safe, reliable, and cost-effective human access to and from low-Earth orbit (LEO) and especially the International Space Station. NASA has also partnered with and partially funded under the CCP SpaceX’s  Dragon and Boeing’s CST-100 capsule. While LEO is left to commercial space companies, NASA and other U.S. industry partners are developing the heavy-lift rocket Space Launch System (SLS) and the crew capsule Orion and. SLS and Orion are designed for human exploration beyond LEO.

Below, a Dream Chaser Captive Carry Flight Test performed in Colorado, on May 29, 2012 (Courtesy of SNC).