On November 29, 2011 photographs of the stranded Russian probe Phobos-Grunt, lost in Earth’s orbit right after launch, began appearing online. Even as ESA and Roscosmos were struggling to regain control of the spacecraft, the images, taken from the ground with an amateur telescope, went viral, ending up in website, newspaper, and press releases all around the world. It was the latest achievement of Ralf Vandebergh, a freelance scientific journalist based in the Netherlands with a passion for astrophotography that dates back to his childhood. We contacted Ralf to learn more about his work, his technique, and his current projects. 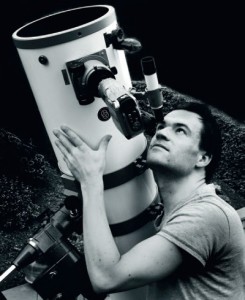 Ralf developed his passion for astrophotography very early: “In 1985 Wubbo Ockels, the first Dutch astronaut, flew on the Space Shuttle,” he recalls. “Pass-times were mentioned in the newspaper, so at age 9 I saw my first pass of a Space Shuttle.” He then developed his technique throughout the ’90s , taking “ordinary” pictures of Saturn: “nobody ever discussed trying to photograph a spacecraft from the ground back then,” he explains, “it was just impossible with amateur instruments.”

That started to change around the year 2000: “some amateurs, especially in Germany, managed to capture images of the ISS with cheap resources,” Ralf says. “In a few months, the technique was developed far enough to allow amateurs to do this, and my old interest in spaceflight picked up again.” The equipment used to capture images is actually very affordable: “a classic Newtonian telescope with a 10 inch aperture,” explains Ralf. “A normal video camera is mounted on the eyepiece, and tracking is fully manual using a well-aligned tracking scope.” Getting a larger telescope is not a priority for Ralf: “In this field it’s more important to be able to control a telescope by hand and to improve your tracking technique,” he says. The first step to capturing a space object image is to check its orbit using software like Calsky, in order to find a favorable pass: “Sometimes it is necessary to compare data from different programs to get better predictions,” says Ralf. 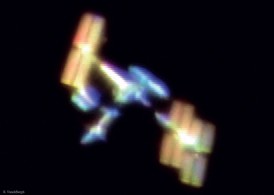 Once a favorable observing window has been detected, Ralf prepares himself for the appointment by readying the equipment and preadjusting to the correct aim: “I wait for the object, looking at a precise point in the sky,” Ralf explains. “When an object is bright like the ISS, you can spot it with the naked-eye,” he says, “when it is faint, I use a bright star along the object’s path to pick it up.” Then, the actual recording starts: “Once the object is in view of the tracking scope at low magnification, I keep it centered on the crosshair as well as I can, and start recording,” he says.

A typical session yields hundreds of frames. “I compare as many frames as possible, to see if I can combine some of them to get an improved signal-to-noise ratio,” says Ralf. “This technique is widely used in planetary imaging, but it is less effective in satellite imaging because you never manage to capture a large amount of frames in the few useful seconds of a pass.” The best is high enough above the horizon: “There is a fast shift in the angle, so the details change their position slightly during a pass,” he explains.

Ralf displays some pictures from his collection recorded during STS-119, the Discovery mission which delivered the large Integrated Truss Segment S6. “It was the most successful mission I ever captured,” he recalls. “One of my best moments was when they sent one of my images up to the ISS when STS-119 shuttle crew was up there: they just had attached the last big solar panel and I was able to take a picture of it from Earth a few days before they would undock the Space Shuttle and see it for themselves.” 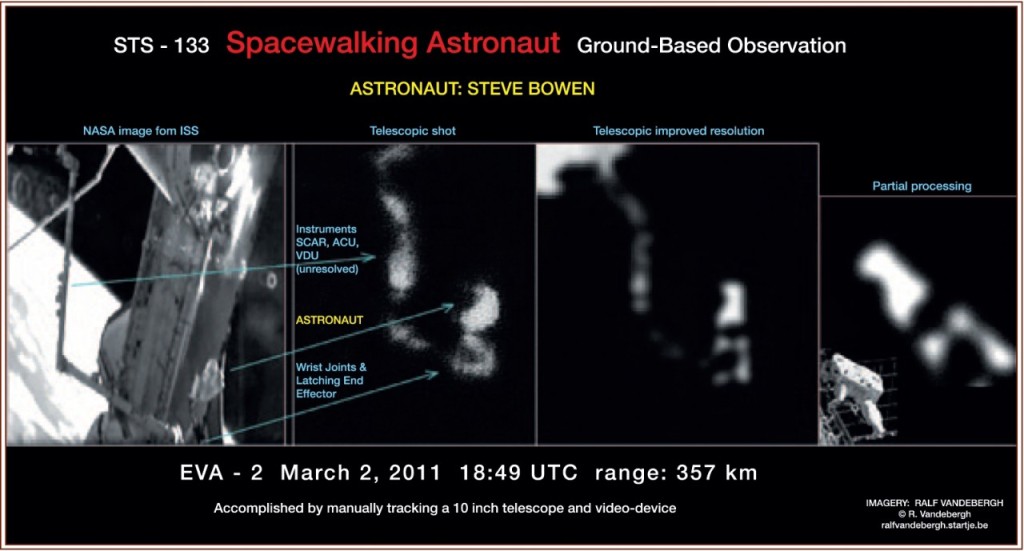 Astronaut Steve Bowen (STS-13) photographed during an EVA. Note the Canadarm, the helmet and the backpack (Credits: Ralf Vandebergh). Click to enlarge

Another successful image, this time from STS-113, was the picture of astronaut Steve Bowen during an EVA: “in the picture you can see the astronaut ‘hanging’ from the Canadarm, with details of the helmet and the backpack,” he points out.

More recently, Ralf’s work achieved exposure with photographs of UARS, ROSAT, and Phobos-Grunt, which ended up in official ESA, DLR and Roscosmos press releases: “It gives much more satisfaction to see your images published in the professional community,” he says, “these people look seriously at image content to find the correct interpretation, instead of just surveying them rapidly as most people do.”

The most interesting part of Ralf’s work involves small objects: “Most astrophotographers don’t really go beyond ISS imaging,” says Ralf. “The ISS is an interesting object, thanks to its size and detail, and it is relatively easy to capture, thanks to its brightness,” he explains. “My current interest is trying to register the rotational or tumbling motion of free floating objects such as space debris,” he continues, “I would say this has become my specialization, and it is what led me to gain interest in issues of space safety!” 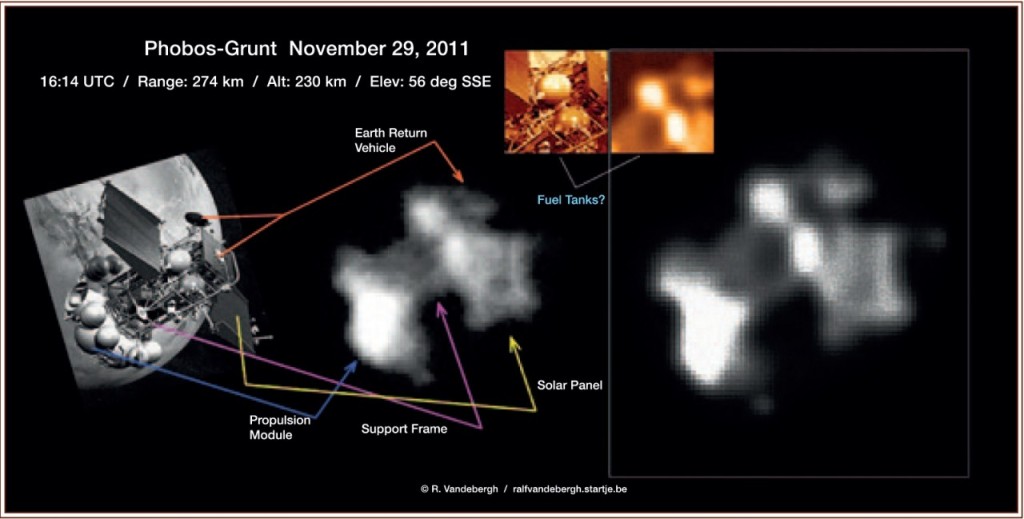 Satellite imaging itself is a very new field: “There are just a few photographers who are doing this,” says Ralf, “imaging of smaller satellites is still a very new and pioneering field in astrophotography, and I’m glad to be on the forefront of it, finding ways to push the envelope further every time.”

Ralf is currently working on another interesting project: “One of my long-running projects is Cosmos 482, a Russian Venus probe which was lost in an elliptical Earth orbit in 1972,” he says. “This probe was part of the Venera series of the early ’70s, and it was lost similarly to the more recent Phobos-
Grunt,” he says. “The project has been running for about 18 months now. I took the first pictures in summer 2010, but not when the probe was in its perigee, so there is margin to get better pictures in the future,” he says.

How does Ralf relate with his fellow astrophotographers? “We are a small community,” says Ralf, “just a few individuals, and sometimes there is a certain degree of jealousy among amateurs doing the same imaging.”

Ralf Vandebergh is a freelance journalist and astrophotographer based in the Netherlands. To see more of his pictures, visit his website: http://ralfvandebergh.startje.be/