On March 23 the latest version of the European Automated Transfer Vehicle (ATV), called ‘ Edoardo Amaldi ‘ after the  Italian physicist and space pioneer, was launched to the International Space Station. The launch was scheduled to take place on March 9, but had to be postponed because one of a problem with one of the the straps that holds cargo within the vehicle. Coincidentally, this launch delay allowed tracking the spacecraft from Europe: had the launch taken place on March 9, the ATV would have had not been visible because the passage would have fallen outside the visibility periods of the ISS. Thanks to a clear sky in the period around March 23, I have been able to collect some very good telescopic image material from the ground. 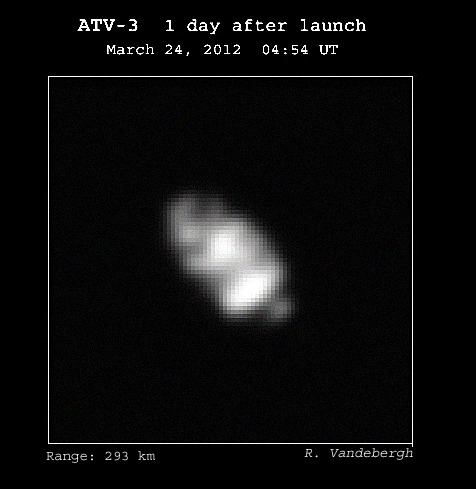 On 24 March, only one day after the launch, I was able to capture the ATV while it was in a still relatively low orbit, at a distance of about 293 kilometers. For the recordings I used my 25-centimeter Newtonian telescope optimized for satellite imaging as usual, with manual tracking on visual sight using a small telescopic viewer. In the first days right after a launch, a spacecraft can often be recorded with a lot of details thanks to the still relatively low orbit. Yet this is not always a guarantee because at these lower orbits  the apparent speed of the spacecraft in the sky is higher. With manual tracking, a faster shutter speed is needed, thus requiring a higher sensitivity, which increase the granularity and the noise of the picture. 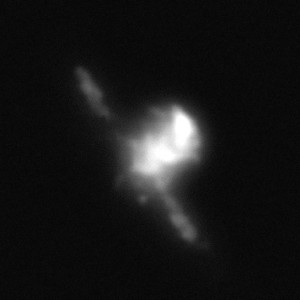 A day later, on March 25, I managed to capture the Edoardo Amaldi again, while the height was about 287 kilometers. This slight difference indicates that the ATV flew almost straight over, allowing recording at nearly the closest observable point with a theoretical optimal resolution. Indeed, the shots of that day came up particularly well, showing details of the solar panels which extend from end to end for about 22 meters. 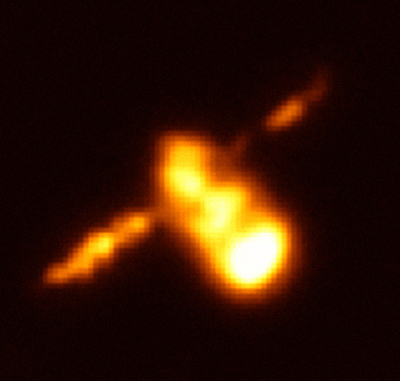 On March  28, the ATV cargo ship finally docked to the Russian Zvezda module of the International Space Station. It is always nice to capture two spacecraft together in a single image shortly before the docking, but this occurrence requires a lot of good luck. A passage is always very short, and allows perceiving only a small piece of the puzzle of a complete space mission. In 2009, during the demonstration flight of the HTV1,  I manage to capture one of such a pictures. In the morning before docking of the ATV there was too far distance to have a chance to capture both spaceships into one picture. The ATV was still visible that morning but, as expected, the resolution was lower because the ATV was already as high as the ISS, around 400 kilometers. The ATV passed that morning a few minutes after the ISS.

Due to cloudy weather, I managed to obtain an image of the Edoardo Amaldi docked to the ISS only a few days later. The space station in the meantime had already been boosted up, a standard procedure that is followed regularly to preserve the ISS orbit. However, the ‘ cruising altitude ‘ of the ISS lately, is a bit higher than some years ago. Back in 2009, the ISS used to fly at an altitude of  about’ 350 km, while now it travels at an altitude comprised between 395 and 400 kilometers.  An experienced photographer of satellites will notice immediately the difference in the resolution and the size of the ISS on the frames. Just a few days before this photo of the ISS with the ATV was taken, the station was boosted up again a few kilometers using the engines of the ATV. Despite the altitude increase, it is still possible to see a lot of beautiful details, including the ATV docked to the ISS-aft end (top) and some detail in the Russian section of the space station. Furthermore, we also see the Japanese Kibo module and the European Columbus lab at the very bottom, although only partially illuminated from below. 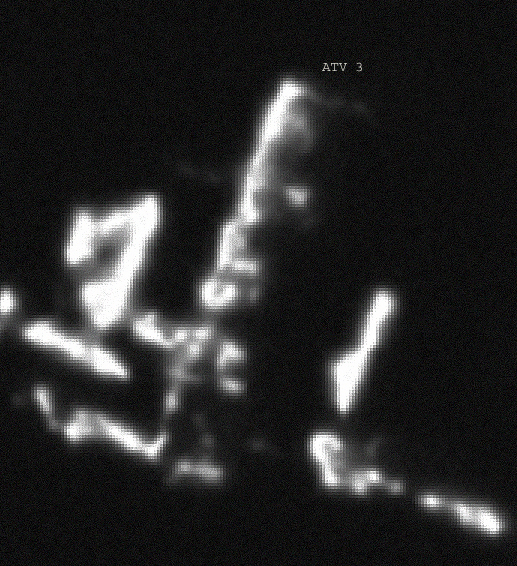