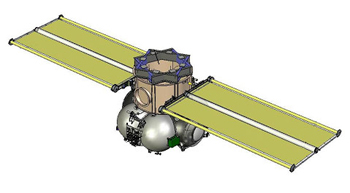 I have photographed many rocket upper stages, as they remain in orbit for a long time. Most satellites have solar panels, but I never had a chance to photograph an upper stage with some kind of panels mounted on it. Until now.

On September 17, 2009, the Russian technology experiment Fregat / IRIS was launched as a secondary payload on a Soyuz 2-1b rocket from Baikonur Cosmodrome in Kazakhstan. IRIS stands for Inflatable and Rigidizable Structure. Two experimental inflatable panels are mounted on a Fregat upper stage. The panels were deployed after the main and smaller payloads were inserted. Contractors of the project are NPO Lavochkin and EADS Astrium. The propulsion-less and battery powered satellite was inserted into an elliptical orbit with a 490 km perigee and a 504 km apogee, with an inclination of 98.8 degrees. The orbit has already decreased to 482 x 497 km. The ground-tracking shows that the upper stage is currently in a polar orbit.

One of the other payloads from this launch – the Meteor-M 1 – is a new Russian meteorological satellite. The other payloads were the satellites Sterkh 2, Universitetsky 2, UGATUSAT, Sumbandila and BLITS. There is almost no information available about the goals of Fregat / IRIS. Despite that, it is strongly plausible that the experiment involves testing of a satellite/debris deorbit technology, since increasing the surface, and thus the drag, of orbiting objects causes a faster decay. Solar sails are another example of a similar technique, which can in turn increase safety of operation in low Earth orbit by clearing it up.

On September 5,  2010,  I took a first telescopic image of this Fregat upper stage at a range of 531 kilometers. The session provided several useful frames. Two of them are shown in the picture below. The image show two elongated segments shifted in a certain angle of each other, one brighter, longer part and a dimmer short part. The dim short segment tends to show more structure, and considering the proportion between the dimensions of the IRIS panels and the Fregat, based on models, this is probably the Fregat. The panels, which reflect more sunlight, are probably the brightest parts. We can clearly see only one panel: this may mean that just one panel has been deployed, but we cannot be certain. Based on experiences with imagery of  the Space Shuttle’s wings and satellite’s solar panels, it often happens that just one wing or panel is favorably illuminated, while the other one is invisible due to shade, unfavorable angle or poor illumination. 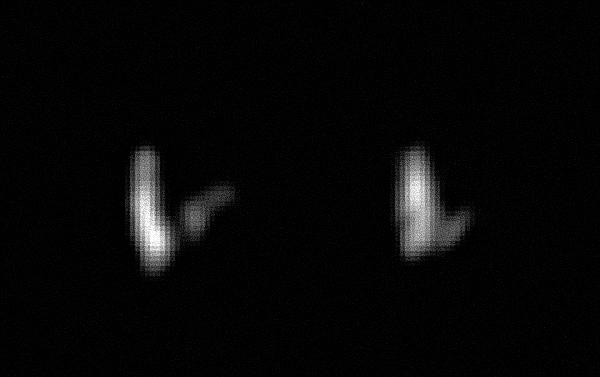