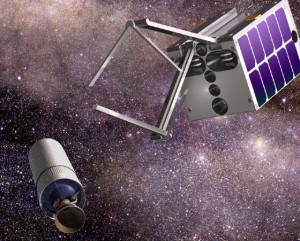 “The focus is maturing technologies for EDDE on the ground,” said Joe Carroll of Tether Applications, which is partnered on the project. “We may get a flight experiment later if the work goes well.”

The EDDE is envisioned as a small, lightweight vehicle that can be launched piggybacked on larger satellites. Once in orbit, EDDE would maneuver around LEO, using light weight nets or grappplers to collect debris. Because of it’s nearly unlimited deltaV capabilities, based on electrodynamic thruster combined with solar power technology, the spacecraft would have a high degree of maneuverability across LEO and would be capable of collecting 136 sun-synchronous objects over a 3 year period. STAR indicates that a fleet of 12 EDDE craft could remove all LEO debris above 2 kg within a 7 year period.

STAR is a small company based in South Carolina, US, dedicated to aircraft and spacecraft research. They have developed  concepts for high-altitude, long-endurance aircraft, propellantless, maneuvering spacecraft, and space elevators for the Moon.

The award was made under NASA’s Game Changing Technology program. STAR has just completed a phase 1 study under the US Navy’s Small Business Innovative Research (SBIR) program. The new contract should allow STAR to complete manufacture and testing of the tether base propulsion system.