The hazard from orbital debris is of growing international concern for the safety of space-based infrastructure.  Because of their potential to fail catastrophically under high velocity impacts, pressurized modules and pressure vessels play a crucial role in spacecraft survivability.  These are the most critical components on-board spacecraft [1-3].  Historically, considerable resources have been used to develop orbital debris shielding for such structures to prevent pressure wall damage.  However, shielding cannot protect the spacecraft from all sizes of debris.  Nowadays, the pressurized modules and high pressure tanks of the most heavily shielded spacecraft are able to withstand the impact of debris up to one centimeter in diameter.  The orbital debris between 1 and 10 cm in size, which is too small to be tracked but large enough to perforate shielded pressure wall, poses the highest risk for spacecraft missions.

The goal of the current research is to develop software which can be used in the initial stages of the design process to determine the ideal pressure vessel configuration, depending on the vessel parameters and protection requirements.  The software will ensure that designed structure+shield configurations enable a vessel to continue operating even when the shield and vessel wall are perforated.

With space activity ongoing and expanding, the rate of collisions in space also increases, leading in turn to the continuously growing orbital debris population.  A chronological timeline of the number of trackable objects orbiting the Earth is shown in Figure 1, broken down by category.  The jump in 2007 was a result of an anti-satellite test on non-functioning satellite Fengyun-1C which created more than 150,000 pieces larger than 1 cm and instantly increased the trackable space debris population by more than 20% [4].  The jump in 2009 was caused by a collision between the 689-kilogram satellite Iridium 33 and the 900-kilogram satellite Cosmos 2251. 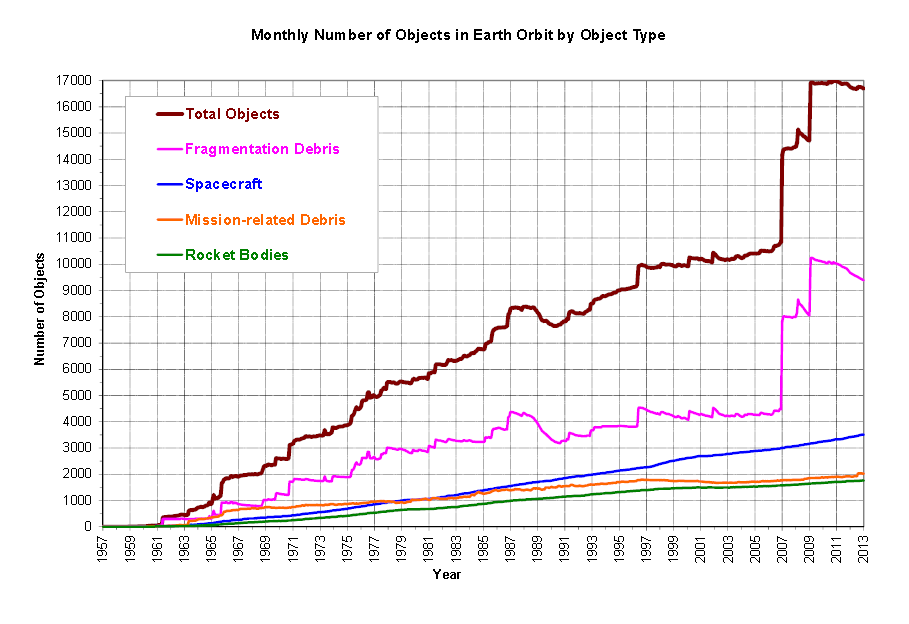 These incidents demonstrate that only one or two collisions can drastically change the orbital debris environment leading to uncertainties in probability driven debris protection requirements.  The dramatic worsening of the orbital debris situation creates a new reality for the orbital environment where all functioning spacecraft are under higher risk than they were designed for.

Experimental data has demonstrated that the case of both shield and pressurized wall perforation presents the potential for a pressure wall to fail in an abrupt fashion [1-3].  If the damage caused by an orbital debris collision is severe enough, the pressure vessel wall may fail through a process known as “unzipping.”  “Unzipping” occurs when the wall material can no longer withstand the stresses caused by the pressure within the vessel, resulting in bursting of the pressure wall (Fig. 2).  The process of “unzipping” typically occurs within fractions of a second after the initial pressure wall damage, releasing the stored energy in an explosive manner and causing catastrophic failure of the spacecraft. 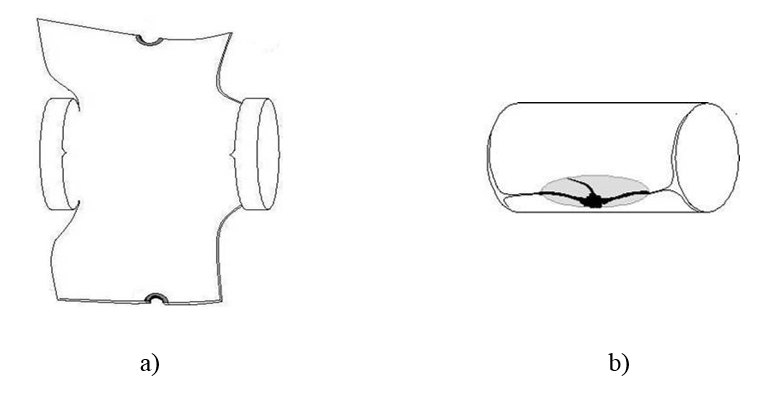 Figure 2. Pressure vessel failure initiated from: a) front side; b) rear side

Understanding whether a spacecraft pressurized structure could undergo “unzipping” due to the impact of debris is crucial for mission success. It could also impact compliance with post-mission disposal requirements, as the spacecraft may lose the capability to de-orbit.

Fig. 3 illustrates the survivability-driven design logic where mitigation and protection measures are assessed for effectiveness using the Fracture Analysis Module.  The novelty of this approach resides in the assumption that impact of undetectable debris has occurred and the pressure wall is damaged.  In the event that a pressure wall is predicted to “unzip,” survivability improvements can be achieved by repeating the steps indicated in the design procedure (Fig. 3) until the “no rupture” condition is achieved.  During initial stages of the design process, various pressure vessel configurations can be analyzed, allowing designers to choose the most ideal configuration.  The Fracture Analysis Module is viewed as a key element in the survivability-driven spacecraft design procedure.  It provides failure control of the damaged structure so that under no circumstances will the “unzipping” occur if the particle dimension does not exceed the specified value, e. g. 1 cm.

Variability in the structure design parameters and impact conditions leads to a variety of impact damages, making failure analysis challenging.  In general, impact damage has the form of a hole surrounded by a zone of crack-like defects (Fig. 4a, b, c).  In order to accommodate the diversity of the impact damage pattern, it is suggested to model the cracked area around the penetrated hole by two radial cracks emanating from the rim of the hole perpendicularly to the applied load, i.e. along the expected fracture path (Fig.4d ).  The proposed model of the impact hole provides a universal approach which fits all penetration scenarios to replicate the observed fracture behaviour of the impact damaged structures. 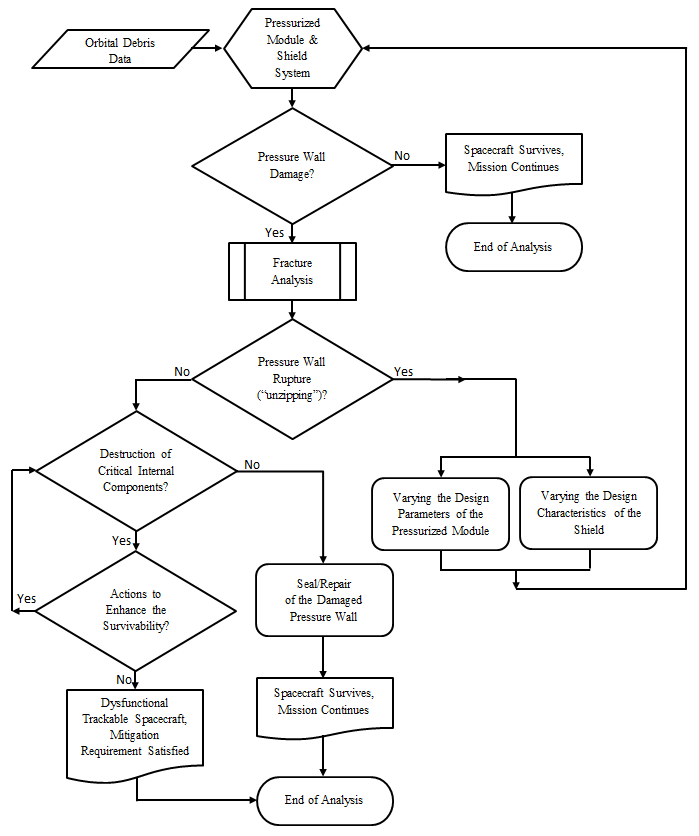 The further analysis of possible unstable crack propagation is conducted using a non-linear fracture mechanics technique.  The problem is solved by numerical method of singular integral equations in Chebyshev’s polynomials using Gauss-type formulae.  The developed methodology is implemented in the Fracture Analysis Module (Fig. 3) and can be used to create “structure+shield” configurations which permit “simple perforation” conditions without bursting for the worst case: where both the shield and vessel wall are perforated. 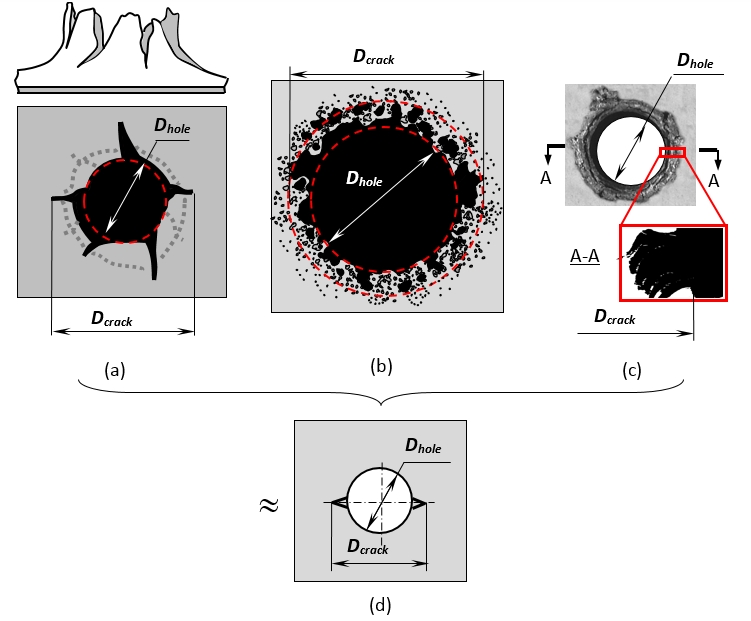 An engineering tool for forecasting the sequences of the orbital debris impact to the spacecraft pressurized structure is crucially important to future spacecraft design.  The developed methodology is viewed as a key element in the survivability-driven spacecraft design procedure, providing that under no circumstances will “unzipping” occur.  Addressing this problem will not only improve the survivability of the spacecraft itself, but also will mitigate debris proliferation by controlling failure modes to produce fewer pieces.

The author would like to acknowledge Dr. Igor Telichev for his assistance and guidance throughout the current study. Without his help, this study would not have been possible.

Frederick James Cook grew up on a grain farm on the outskirts of the village of Binscarth, Manitoba, where he participated in the everyday activities of farm life. After receiving a Bachelor’s degree in Mechanical Engineering in 2010, Frederick decided to further his education in the Master of Science program in the area of Applied Mechanics. He has completed the MSc course work with a GPA of 4.0. Frederick conducts research under the supervision of Prof. Igor Telichev in the field of modeling and failure control of spacecraft pressurized structures subject to orbital debris impact. Frederick presented his research at the 2011 Canadian Space Summit, 2012 International Congress of Canadian Society for Mechanical Engineering (CSME) and was awarded by the first prize at the Mechanical Engineering Graduate Students poster competition held at the University of Manitoba. Frederick recently won the SGAC – IAASS competition scholarship to attend the 2013 IAASS Safety is Not an Option conference in Montreal.