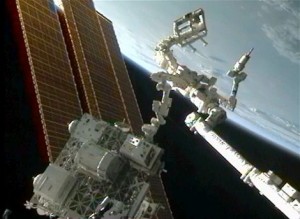 Robotic Refueling Mission (RRM) activities aboard the International Space Station (ISS) moved into the next phase on January 14.  The operations are being carried out using the Special Purpose Dexterous Manipulator, or Dextre.

“Over the last 2 years, the team has put in more than 300 hours of preparation.” said Charlie Bacon, RRM operations manager.  “When we finally execute the namesake task of RRM, we anticipate that our work will culminate in proving that in-orbit satellite refueling is no longer future technology – it’s current technology.”

The RRM mission will use the space station’s remotely operated Dextre to simulate robotic refueling in space in between January 14th and the 24th. The operations, conducted by NASA and the Canadian Space Agency from Johnson Space Center, will consist of remotely snipping wires, unscrewing caps and transferring simulated fuel. The mission’s aim is to demonstrate tools, technologies and techniques that could in the future make satellites in space more robust and sustainable.

The RRM demonstration is specifically made to test the possibility of repairing and refueling satellites orbiting in geosynchronous Earth orbit (GEO). GEO, which is situated approximately 36,000 km above Earth, currently hosts more than 400 satellites essential for communications, television, and weather data.  According to Benjamin Reed, deputy project manager at NASA’s Satellite Servicing Capabilities Office, repairing and refueling satellites in orbit is far cheaper than building and launching entirely new spacecraft.  With these new capabilities, NASA would increase satellites’ operational lives, not only boosting the commercial satellite-servicing industry, but also helping to manage the growing orbital debris problem.

After being launched aboard the final mission of the Space Shuttle Program, RRM was transferred from the Atlantis Shuttle cargo bay to a temporary platform on ISS on July 12, 2011, thanks to a spacewalk by astronauts Mike Fossum and Ron Garan.

“The technologies we’re building to help rescue satellites in 5 years could be the very same ones used to clean up space ten years in the future,” says Reed, “or save a spacecraft on the way to Mars 30 years from now”

Additional RRM demonstrations will continue into 2013 and through 2015 with new tasks and activities.

Below, a report on Day 1 of NASA’s Robotic Refueling Mission: