For the first time in Europe, the German Aerospace Agency (DLR) in cooperation with an Austrian Laser station in Graz has successfully demonstrated the use of a laser technology for detecting space debris. 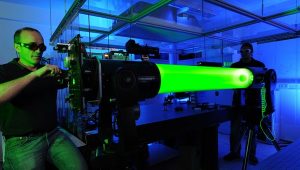 As precise tracking of tiny space debris particles is still difficult, German scientists have focused on developing an optical observation system.  They utilize a powerful laser that can detect space debris particles as small as a few centimeters and measure their orbits.  In the future, the scientists believe it will be possible to transfer those pieces from their orbits and bring them to safe re-entry and burn up in the atmosphere.

During the test operation in January, the laser beam sent into space from Graz Laser station detected more than 20 used rocket parts at a distance between 500 to 1800 kilometers. “Now we have confirmed that our ideas really work,” explained Professor Adolf Giesen, the leader of DLR’s Institute for Technical Physics. “Currently we are developing and building a system for registering space debris, the laser with high pulse energy is just one part of the project that enables measuring of rather tiny space debris objects.”

The need to track those small particles and calculate their orbits is becoming more and more urgent. The number of collisions between retired satellites and spent rocket parts is increasing, with each collision creating a huge amount of new debris. These particles pose a huge threat to all working satellites in orbit. “A particle of one centimeter in diameter can completely damage a satellite,” says DLR’s department manager Wolfgang Riede. 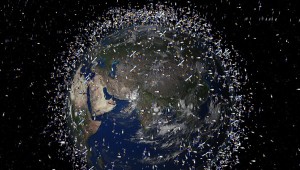 In the next step the laser beam is expected to be used to clean up crowded orbits (Credits: DLR).

When two objects circling the orbit in opposite directions at the speed of eight kilometers per hour collide, the relative speed of the impact is 14 kilometers per second. Any avoidance maneuvering is possible only when the position of the space debris objects is exactly calculated.  Conventional radar telescopes can provide this precision only to a very limited extent. Many unnecessary and fuel consuming orbit maneuvers are therefore performed as well as numerous collisions are taking place due to insufficient information.

The ambitious goal the German physicists set themselves is to finish the system by 2014. The laser will be sending 1000 pulses per second from the ground to space. This should enable recording of the light reflected from the space debris particles with utmost sensitivity. “We send the high-intensity laser pulses in space and subsequently we count the single photons that return,” explained Professor Giesen.

The task is even more complicated as the surface color of spent rocket parts or satellites ranges from black to glossy, making them difficult to detect. Even thought the number of photons that returns is rather small, it enables the scientists to calculate the distance, direction and location of space debris with high accuracy.

After building up a catalogue of small space debris particles and their precise positions, the next step will aim at reducing the total amount of space junk. The laser beam can slow down the debris by hitting its surface and vaporizing part of the material. When the speed decreases sufficiently the piece of space debris will start sinking to the atmosphere. German scientists believe that the method can start cleaning up orbital space in fewer than ten years. If a solution is not found, it is estimated that in next 20 or 30 years the most crowded orbits will become so full that no safe space flight would be possible.

The video below depicts a history of space debris
[youtube http://www.youtube.com/watch?v=L915JJMcu4s]