The Space Debris Sensor (SDS) is scheduled to launch in the trunk of the SpaceX 13 Dragon spacecraft capsule in November 2017. After the capsule is mated to the International Space Station (ISS), the robotic arm will remove the sensor from the trunk and attach it to the Columbus Module external payload facility. The SDS will be mounted facing the velocity vector and will remain there for at least 3 years collecting data on the small debris environment at the ISS. The SDS is a technology demonstration designed to determine how well a combination of detection methods can be used to characterize the size, speed, direction, and density of debris smaller than 1 mm that hits the sensor. The location on Columbus module is the same previously used by the European Technology Exposure Facility (EuTEF) that included two debris measurement sensors exposed from February 2008 to September 2009.

After the mission is complete, the SDS will be placed in a Dragon trunk for disposal during re-entry. The knowledge from this mission will be used to update orbital debris models and help in the development of future sensors that will be placed in higher orbits where the small debris environment has never been directly measured.

One of the greatest challenges to understanding the most important risks to spacecraft from debris collisions is understanding the nature of debris in the millimeter size range. These debris are too small to be detected with state-of-the-art, ground-based radar or optical sensors, so we must rely on in-orbit detectors that can sample the environment at close range. The NASA Orbital Debris Engineering Model (ORDEM) 3.0 small particle environment (10 μm to approximately 1 mm) was predicated in part upon a comprehensive dataset based on post-flight inspections of the Space Shuttle windows and radiators. Because it was possible to inspect the impacts on these surfaces with electron microscopes and to identify the impactor material, we were better able to understand the differences in material of the impactors. Most significantly, a sizeable component of highdensity particles was identified. These highdensity particles typically cause more damage for a given size particle than lower-density particles such as aluminum. Even representing only a fraction of the total population, they can have a disproportionate effect on spacecraft risk. Because the debris population is dynamic, especially for the small particle population where drag acts over shorter time scales, it is important to actively monitor the population. With the retirement of the Space Shuttle program in 2011, NASA no longer has a dedicated, calibrated sensor to observe the environment. In addition, in situ measurements, by nature, can only sample the flux of particles at the altitudes where they fly. Models indicate that the flux of particles at Shuttle altitudes (below 600 km) may be only the proverbial “tip of the iceberg,” and there may be significantly higher flux at higher altitudes between 700 and 1000 km altitude where many NASA robotic spacecraft operate. The NASA Orbital Debris Program Office (ODPO) has been developing the technology for in-situ measurements of the OD environment for over a decade, and one initiative is the Debris Resistive/Acoustic Grid NASA-Navy Sensor (DRAGONS). DRAGONS uses multiple layers of thin film sensor, upon which a printed circuit of fine wires is resident. Acoustic waves in the thin film indicate time and location while the number of wires severed is proportional to orbital debris (OD) penetrator size in one dimension; multiple layers allow for a velocity and trajectory to be estimated. Two layers and a backstop also inform at least qualitative estimates of OD mass density. The DRAGONS technology has been embodied in the  Space Debris Sensor scheduled to launch to ISS in November 2017. 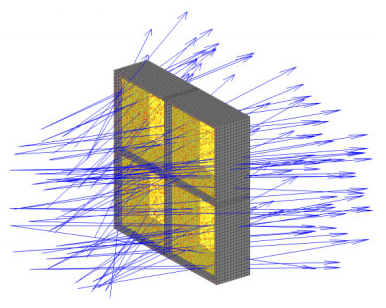