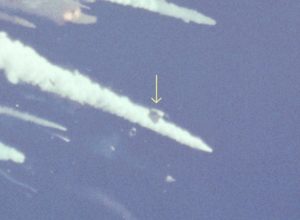 The intact Challenger cabin plunge into the ocean. Astronauts inside activated their emergency oxygen supply, an evidence they were still alive

On January 28, 1986, STS-51-L launched with Astronauts Dick Scobee, Michael J. Smith, Ellison Onizuka, Judy Resnik, Ronald McNair, Christa McAuliffe, and Gregory Jarvis aboard. Seventy-three seconds into launch, their orbiter, the Challenger, broke apart when strong wind gusts put the final touches on a tragedy that started with stiffened O-rings on a freezing Florida morning. The orbiter broke into pieces, the details obscured by billowing vapor. Two minutes and forty-five seconds later, the crew chamber hit the ocean with an acceleration of 200 G. It was one of the worst space disasters of spaceflight history.

Unlike the investigation after Columbia, Challenger’s Rogers Commission did not mention the physiological details of the crew’s deaths, probably out of a sense of sensitivity for the astronauts’ families. NASA released a statement at the time indicating that they were unable to determine the cause of death, but “established that it is possible, but not certain, that loss of consciousness did occur in the seconds following the orbiter breakup.”

That is the story that has been passed down in the years since. However, a few voices have risen to dispel that version of events as only partially true. One of them is retired and somewhat eccentric astronaut Story Musgave. Musgrave was a physician before he became an astronaut, serving as a part-time trauma surgeon during his years at NASA, and he knows exactly how Challenger’s astronauts died. “They died when they hit the water,” Musgrave says, ” We know that.”

Watch the report below for more details: