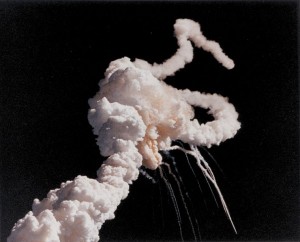 In a coincidence nearly odd enough to make even a rocket scientist wonder about fate, all three of NASA’s multi-astronaut fatalities occurred within a span of six calendar dates. On January 27, we took a look back at the Apollo 1 fire. Today, we remember the loss of Challenger on January 28, 1986.

The factors that contributed to this accident are almost too numerous to count. There’s the infamous O-ring issue, of course, a part that was already flawed but doubly so in the freezing temperatures experienced on that February 1 – so unusual in Florida. There were the numerous red flags waved by NASA and solid rocket booster manufacturer Morton Thiokol that were subordinated to the desire to finally launch a mission that had already been delayed several times. There was the horror expressed by Rockwell International, the prime shuttle contractor, at the idea of launching the icicle-draped shuttle they saw in their video feed of the launch site that morning. There was the decision to rely on the secondary O-ring to pickup any slack left by the primary O-ring in a system deemed of “Criticality 1,” meaning failure of the system could jeopardize integrity of the shuttle.

What happened after launch ignition? First, the right solid rocket booster’s aft joint flexed, as it usually did, allowing a spurt of 2760°C gas to escape the joint and erode the O-ring. Generally, the O-ring would wiggle around at this point, resealing the joint; this time, due to the cold temperatures, it didn’t. The blow-by of the gases continued until both O-rings were completely destroyed and a temporary seal of melted aluminum oxide was formed.

The ad hoc seal might have held long enough to burn out the boosters. But at T+37 seconds, Challenger experienced extremely strong wind gusts. The seal was unable to withstand the wind and broke. Flames began spurting out of the cracked joint, burning through the external tank. The booster partially detached and the hydrogen tank rammed into the liquid oxygen tank. The forces and asymmetry that resulted caused Challenger to veer off trajectory, at which point it was torn apart by aerodynamic forces.

The robust crew cabin remained intact and there is evidence that some of the crew members survived briefly as the cabin arced into a ballistic trajectory. But no one could survive the approximately 200 G’s they would have felt when the cabin slammed into the ocean minutes later.

The most recent space catastrophe took place on February 1, 2003;  Space Safety Magazine published a special report in honor of this tenth anniversary of Columbia’s loss. We will revisit the Columbia accident on February 1, NASA’s Day of Remembrance.