On the 30th anniversary of the Space Shuttle Challenger disaster, Space Safety Magazine is publishing articles under “Witness to Tragedy”, depicting the personal stories and viewpoints of those who witnessed it from within.

As the accident began, I was watching a close view of the vehicle’s profile.  I saw a flash down low and one up high…about where the SRB separation motors were located and thought I was seeing a premature separation of the solid boosters.  My mind seemed to kick into high gear at that point, because I saw what appeared to be a flame moving at high speed from the rear of the vehicle toward the front.  I remember mumbling to myself, “Oh, God, tell me I’m not seeing this!!”, something I did two more times as the vehicle quickly broke up.  I remember seeing a shot of the pieces of vehicle debris raining down into the ocean, and I remember Linda Hamm approaching me because of my familiarity with the high-speed flight environment (F-14A) and asking me if I thought anyone could have survived.  I responded simply by shaking my head “no”. 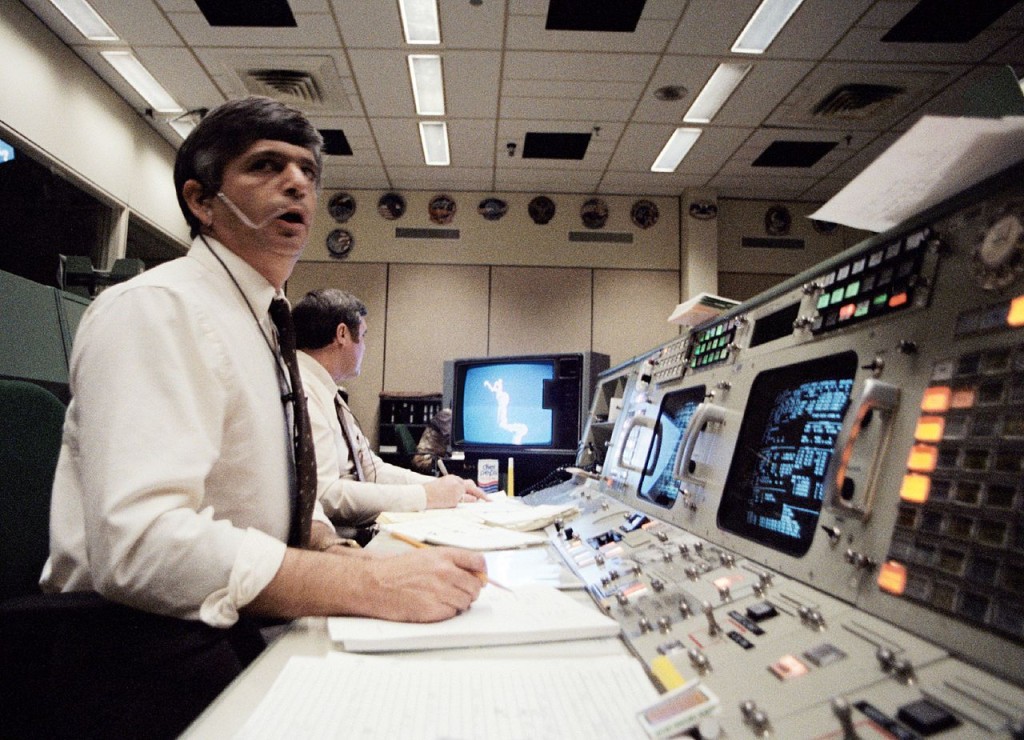 Horror and shock is etched on the faces of Flight Directors Jay Greene (foreground) and Lee Briscoe in the aftermath of the explosion. – Credits: NASA.

As the shock hit all of us, I went back up to the office and pulled down the SODB (Shuttle Operational Data Book) and started looking  through various constraints to see if I might find a clue about what might have gone wrong.  One thing that jumped out at me was a Solid Rocket Booster constraint on the Propellant Bulk Temperature. We had launched at a temperature below the requirement.  Turned out the propellant bulk temperature was higher than that but I did have the right subsystem and the right contributing cause, i.e., launching in a temperature that was too low for the current design.  I also remember the Mechanical Systems instructor, Randy Barckholtz, coming to me a day or two later with a picture out of a newspaper that showed the vehicle breakup as it was occurring and pointing out what appeared to be the crew cabin exiting the conflagration.  I didn’t think he was right; but he was, as we all realized later.

I could go on for quite a while what I took away from this; it colored my outlook on manned spaceflight from there on out, including how I monitored the vehicle during the launch phase when that became one of my primary responsibilities at the S&MA Console in MER later.  While I hoped I’d never see another accident like that during my remaining time at NASA, that was not to be. I was even more in the middle of the events surrounding Space Shuttle Columbia, but that is a story for another day.