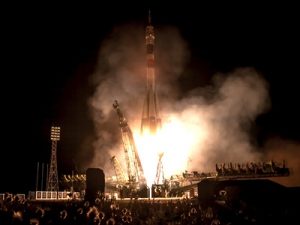 A Soyuz launch earlier this year. Another Soyuz launch nearly 30 years ago ended disastrously, out of public view but whose aftermath was noticed by the US intelligence community (Credits: NASA).

Last week a Russian Proton rocket exploded in spectacular fashion at the primary Russian launch facility at Baikonur in Kazakhstan. The rocket lifted off, wobbled, looped, and started breaking apart in fiery clumps before slamming into the ground and exploding. We know all this because there were a lot of people on site to film it in real time, or post their videos to YouTube shortly thereafter. This is, after all, the modern age.

But when Russian rockets blew themselves to smithereens during the Cold War, usually there was no public acknowledgement of the failure by Soviet officials, who preferred to conceal their embarrassments. The United States intelligence community, however, was often watching. And occasionally American officials sought to advertise the failure for propaganda purposes, even if they could not show evidence of it. Such was the case with the explosion of a Soyuz rocket in September 1983 that came close to killing two cosmonauts. Newly declassified CIA documents now reveal some of what the US intelligence community knew about this event.

According to a declassified document from the National Photographic Interpretation Center (NPIC, pronounced “enpick”), which was charged with analyzing satellite reconnaissance photographs, in fall 1983 American spy satellites spotted preparations for a space launch at the sprawling Soviet missile and space launch range at what was then called “Tyuratam,” specifically what the CIA labeled “Launch Site A1.” A1 was in fact the most famous launch pad at Tyuratam, both for the Soviet Union and the rest of the world. When a CIA U-2 spyplane had first flown over Tyuratam in the late 1950s, it spotted one primary launch pad, which NPIC soon named Complex A. Later launch complexes were designated B, C, D, and so on. But Complex A became famous as the site of the Sputnik launch, and later Yuri Gagarin launched from there as well.

The satellite photography indicated that “a space launch vehicle is on the pad,” which implied that a launch was imminent because the Soviet Union, unlike the United States, didn’t dawdle with launch operations—they prepared their rockets and spacecraft indoors, horizontally, then rolled them out and erected them, launching usually within a few days of pointing them toward the sky.

But there was another key clue in the photography: “The presence of an escape tower atop the payload indicates that it is an SL-04 launch vehicle with a Progress/Soyuz payload.” Robotic spacecraft did not have escape towers. But although the launch was sure to happen soon, the brief report stated that “No activity is observed at the reviewing stand at Tyuratam ESV [Earth Satellite Vehicle] tracking facility.”

A short time later—the exact date is unknown—NPIC issued another report on a “probable launch failure” at Launch Site A1. The report stated that the Soyuz launch vehicle, which the intelligence community had designated the SL-04, was no longer on the pad where it had been observed in previous imagery. But there was something more:

“The service/support arms at the launch pad are in the lowered position and the overall launch pad area and flame bucket are heavily darkened. Numerous pieces of probable debris are scattered throughout. A recovery area for the probable Soyuz spacecraft is approximately 2 nautical miles northeast of launch site A1.”

The US reconnaissance satellite had photographed the scene relatively soon after the accident, because the report went on to say that “The probable Soyuz spacecraft, partial remains of the escape tower, one Hook and three Hip helicopters, a special recovery vehicle, and one bus are at the recovery area.” Several more lines of text have been deleted from this document, which was declassified only a few weeks ago.

Another NPIC report soon followed, providing slightly more detail than the previous one. It stated that “the flame bucket, launch pad, and service/support arms are heavily charred. Debris, probably from the launch vehicle, is scattered on the floor of the flame bucket. The destruction of the SL-04 vehicle at Launch Site A1, and severe burning of the launch pad area and support mechanism may have rendered the site inoperable. However, the full extent of launch pad damage, and the operational status of the site cannot be determined at this time.”

The report also noted that the only other pad at Tyuratam capable of launching a Soyuz rocket, Launch Site B1, was at the time “undergoing extensive refurbishment.” The Soviets, it seemed, were doubly-screwed.

Other launches, other failures

Although imagery satellites provided a tremendous amount of data about many Soviet Cold War activities, and in many ways were the most powerful and prolific intelligence tools that the United States intelligence community possessed, they were far from the only tools in the toolbox, and were probably not how the CIA was initially tipped off about the Soyuz failure. The satellites, after all, were in low orbits and only passed over Tyuratam only once or twice a day. But the United States had other satellites, in much higher orbits, with large antennas pointed down at Tyuratam and other Soviet launch sites. Their mission was to listen in on the signals that Soviet rockets broadcast down to the ground during flight, as well as any commands that might be sent to the rockets. They could also pick up the communications at the launch sites, and an increase in communications was a clear tip-off that a launch was about to occur, prompting the Americans to turn on other sensors or even to launch aircraft capable of tracking rockets and missiles in flight from over the Pacific Ocean.

The Soyuz explosion undoubtedly registered on seismic and infrasound detectors that the United States employed primarily to listen for evidence of atomic tests, but could also detect other large explosions. But probably the best source of real-time data was an Air Force Defense Support Program (DSP) infrared missile warning satellite in geosynchronous orbit. The DSP had a large infrared telescope that was designed to detect the heat of Soviet ICBM and rocket exhausts and it almost surely detected the explosion of the Soyuz. 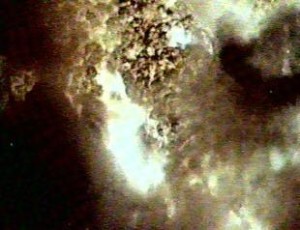 This was not the first time that American reconnaissance satellites had observed a major launch accident at Tyuratam. The most notable example was in July 1969 when a huge Moon rocket known as the N-1, but called “the J vehicle” by the CIA because it launched from Complex J, rose off its pad a few hundred meters and then fell back onto it and exploded with the force of a small nuclear bomb. The devastation from that failure was readily visible on reconnaissance satellite imagery.

By September 30, 1983, American reconnaissance satellites detected more recovery operations at Launch Site A1. “Two special recovery vehicles were in the recovery area,” an NPIC report noted. “One vehicle was associated with the retrieval of the spacecraft, and the other was for personnel transport. The probable command module of the spacecraft was on the ground near the vehicles, and the possible recovery parachute was nearby. In addition, one Hook helicopter, three Hip helicopters, and one bus were in the area.” But another American satellite overflew Tyuratam and the report noted that “Approximately four hours later at 0945 Zulu [time], the area had been vacated of all equipment.” 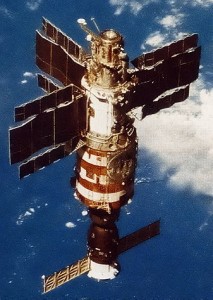 The nighttime launch was for the Soyuz T-10-1 mission, which was going to rendezvous with the Salyut 7 space station then occupied by another crew. Commander Vladimir Titov and flight engineer Gennady Strekalov were inside the cramped Soyuz, which was not much roomier with only two crewmen instead of three, while the vehicle was being fueled. Ninety seconds before launch a valve failed to close, and kerosene propellant spilled out onto the pad. The kerosene ignited and flames began to engulf the fully-fueled rocket. Ground controllers fired the emergency escape system which blasted the spacecraft off of the rocket and into the night sky. The rocket exploded on the ground underneath them almost immediately afterwards.

Titov and Strekalov’s spacecraft performed the way it was supposed to in an emergency, separating its orbital and descent modules, firing its parachute, and landing them—hard—on the ground only a few kilometers away. They were bruised, but not severely injured. Back at the launch pad their destroyed rocket had blown itself up and its remains were burning furiously.

The Soviet government did not issue a press release stating that one of their rockets had blown up, so the Americans decided to do it for them. Western news media soon carried reports from “American intelligence officials” stating that the Soviet Union had suffered a major space launch accident. They did not release any photographs of the blasted facility, because at that time the United States would not discuss reconnaissance satellites, let alone show their pictures. The Soviet government only reluctantly admitted that it had experienced a launch problem, but provided few details. The American government continued to milk the event for all the propaganda value that it could, focusing attention on the two cosmonauts who were “stranded” aboard Salyut 7. Those claims, it turned out, were overblown.

It would not be until many years later, after the end of the Cold War, that the Russians finally revealed what had happened, and even released some confusing movie footage of the pad fire and emergency escape. Amazingly, the Soyuz T-10-1 spacecraft, which had never gotten more than a few kilometers off the ground, was eventually refurbished and later used for Soyuz mission T-15. Both Titov and Strekalov got to fly again, and Titov eventually flew into space aboard an American space shuttle.

The United States continued to monitor the Tyuratam launch range and soon another NPIC report noted that “At least four vehicles including a probable truck-mounted crane are working in the flame bucket to remove debris” and four other vehicles were at the rim of the flame bucket.

By October, NPIC noted that post-accident operations were in progress, with two truck-mounted cranes assembling a larger rail-mounted crane on the apron of the launch pad. “The presence of the large crane indicates that the gantry service tower on the launch pad will be dismantled for refurbishment or replacement.”

On October 3, 1983, NPIC issued another report, and the subject indicated that NPIC must have received questions about the status of Soviet space launch capabilities in general. It stated that four of six space launch pads at Tyuratam, and three at the Soviet launch complex at Plesetsk, were still operational. The report also revised an earlier NPIC claim: Launch Site B1, which also launched Soyuz rockets, was about to be refurbished, but was still capable of operations. Major gantry components had been brought in and stockpiled along the approach to the pad, but were not blocking the rail line. Considering the recent explosion at Launch Site A1, NPIC analysts speculated that “the refurbishment plans… may be delayed.”

Shortly thereafter, NPIC produced another report that stated that “the umbilical tower and the launch vehicle stabilization arms have been removed from the launch pad. The launch pad aperture ring and the two large service arms remain in place. However, their removal and replacement probably also will be necessary. This major repair activity closely parallels the 1979-80 pad refurbishment which took approximately 15 months to complete.”

The Soviet space program recovered and Soyuz spacecraft began flying again. But it would be many years before they would eventually start to open up about their program, and many more years before live broadcasts of their launches—successful and otherwise—became the norm.

– By Dwayne Day. This article was originally published in The Space Review. It is reposted with permission of the author. Dwayne Day can be reached at zirconic1@cox.net.