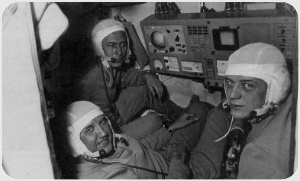 The crew of Soyuz 11 whose 23 day mission to space station Salyut 1 ended in disaster (Credits: Sovfoto).

In 2007, Vaughn Juares produced a short film entitled, simply, Soyuz 11. Juares, known for his short films, music videos, and viral advertising, recreated what the deadliest Soviet space accident – and the only fatalities to occur outside Earth’s atmosphere – may have looked like from inside the capsule with crew members Viktor Patsayev, Georgy Dobrovolsky, and Vladislov Volkov before it depressurized. Watch Soyuz 11 below: