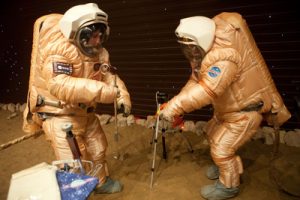 Crew training for ‘Marswalk’ at the simulated martian terrain of the Mars500 experiment. (Credits: ESA/IPMB).

Russian scientists processing data from the Mars 500 experiment stated that extreme  radiation on the Martian surface can increase the risk of DNA damage, resulting in cancer or other serious diseases. General changes in health resulting from genetic mutations are deemed one of the most dangerous pitfalls of outer space exploration. The results of Mars 500 were presented at an International Symposium held in Moscow in late April. “According to our estimates, researchers on the surface of Mars can expect a number of adverse factors, such as cardiac arrhythmia, reduced stability and performance, sensory impairments, as well as more long-term consequences in the form of changes at the DNA level, and demineralization of bone tissue,” said Anatoly Grigorev, the deputy head of the Russian Academy of Sciences. 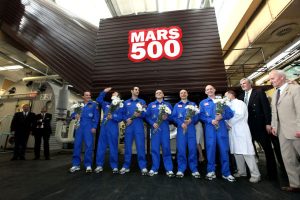 Humans on Earth are protected from cosmic rays and heavy charged particles by the magnetosphere of our planet. Beyond  low Earth orbit the intensity of cosmic radiation  increases significantly. Mars has neither a thick protecting atmosphere nor a magnetic field which makes any living organisms on its surface subject to potentially fatal radiation. However, estimating the impacts of the radiation on astronauts’ health in a ground base experiment is impossible. The unique 520 day long Mars 500 experiment took place in Moscow and finished on November 4 2011. During that time six male participants stayed locked up in a spacecraft mockup in complete isolation.  According to preliminary results all of them preserved their health and performance. Nevertheless, the researchers speak about a  high possibility of astronauts suffering from decreased motoric activity, monotony and frustration during a real Mars mission.   Watch the following video for a review of the Mars 500 experiment: [youtube http://www.youtube.com/watch?v=OX6Uwqi57iw]