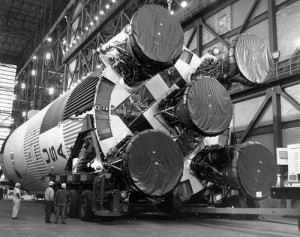 A view of the five F-1 engines on the Saturn 5 that launched NASA’s Apollo 11 from Kennedy Space Center in 1969 (Credits: NASA).

In 1969 Apollo 11 launched atop a Saturn 5 rocket. The five F-1 engines on the first stage of that rocket dropped into the Atlantic Ocean as planned, minutes after take-off. And there they have remained, at the bottom of the ocean, undisturbed – until now.

Jeff Bezos, founder of Blue Origin as well as Amazon.com, announced that an effort to located the lost engines has now succeeded. Bezos funded the effort from his personal fortune and now plans to raise the engines. “We don’t know yet what condition these engines might be in,” said Bezos in a statement. “They hit the ocean at high velocity and have been in salt water for more than 40 years. On the other hand, they’re made of tough stuff, so we’ll see.”

In 2009, Gus Grissom’s Liberty Bell 7 space capsule was raised from the Atlantic floor by a private expedition, 38 years after it sank when the hatch opened prematurely after Grissom’s splash down. The capsule  was restored and is now on display at a Kansas museum. “There has always been great interest in artifacts from the early days of space exploration,” said NASA spokesman Bob Jacobs in a statement after Bezos’ announcement. “[This] announcement only adds to the enthusiasm of those interested in NASA’s history.”

The nearly 6 meter engines were located using “state-of-the-art deep-sea sonar” according to Bezos’ statement, over 4,000 meters below the ocean surface. Bezos has not indicated when or how many of the engines will be resurfaced. The engines are property of NASA, but Bezos hopes NASA will allow one of them to be displayed at a museum in Amazon.com’s home town of Seattle.

In the video below, see some of the items recovered from the Liberty Bell capsule: