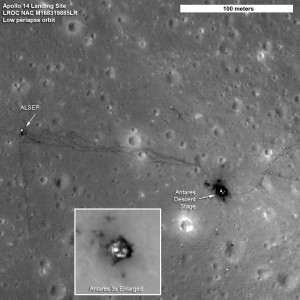 The paths left by astronauts Alan Shepard and Edgar Mitchell on both Apollo 14 moon walks are visible in this image. (At the end of the second moon walk, Shepard famously hit two golf balls.) The descent stage of the lunar module Antares is also visible. (Credit: NASA’s Goddard Space Flight Center/ASU)

NASA published the sharpest images ever taken about Apollo landing site. The pictures, captured by the Lunar Reconnaissance Orbiter (LRO), document in details the paths that Apollo 12, 14 and 17 astronaut followed during their exploration. Scientific instruments, such as the Apollo Lunar Surface Experiments Package (ALSEP), are clearly identifiable, as well as the tracks laid down by the lunar rover and even foot trails.

“The new low-altitude Narrow Angle Camera images sharpen our view of the moon’s surface,” said Mark Robinson, Arizona State University researcher and principal investigator for the Lunar Reconnaissance Orbiter Camera (LROC). “A great example is the sharpness of the rover tracks at the Apollo 17 site. In previous images the rover tracks were visible, but now they are sharp parallel lines on the surface.”

The high resolution of these images is made possible by current LRO’s orbit, which is slightly elliptical, with the lowest part passing over the sunlit side of the moon at an altitude of just 21 kilometers. The spacecraft has been kept in this orbit for 28 days, allowing full coverage of the surface with LROC’s Wide Angle Camera. The the spacecraft will now be returned to its 50 kilometers orbit.

The images are available at NASA website. Also recommended the movie section. 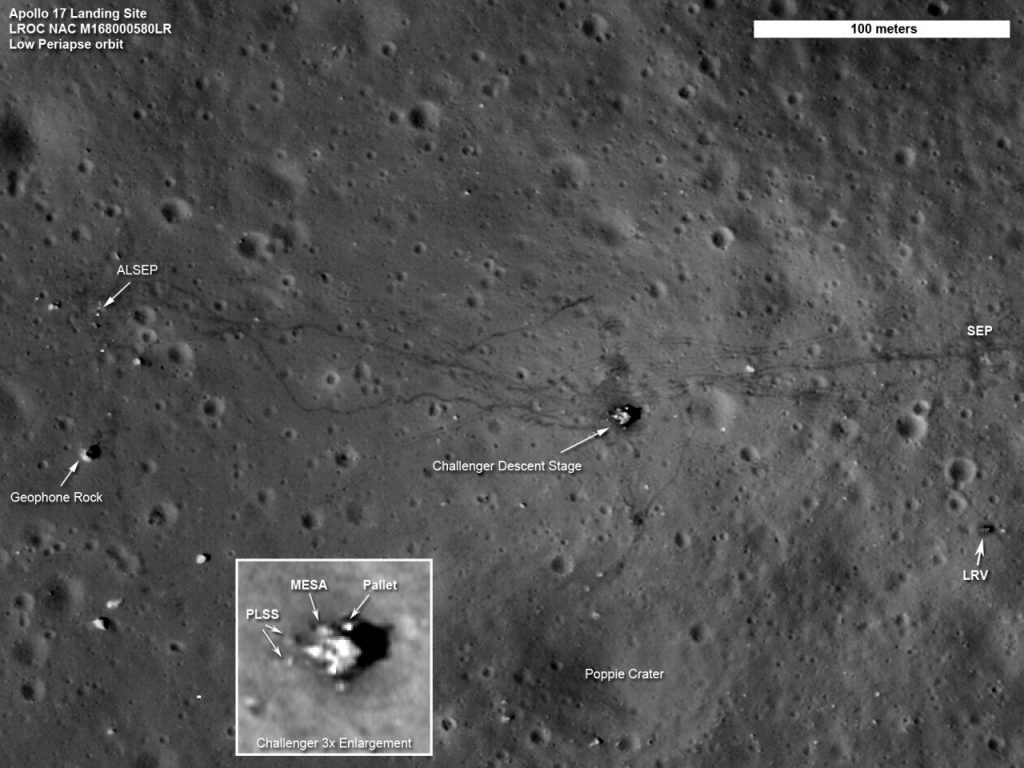 The Apollo 17 site gives an idea of the considerable mobility of Cernan and Smith. Note how the trails made by astronauts on foot can be distinguished from the dual tracks left by the lunar rover (Credits: NASA/Goddard/ASU).