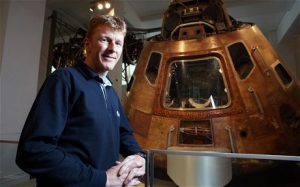 Timothy Peake, a member of the ESA astronaut training corps will be among those preparing for a crew mission to an asteroid (Credits: Andrew Crowley).

Asteroids are hot commodities of late. Not long after Planetary Resources Inc. announced their intention of mining asteroids for profit, word comes that NASA will soon begin training astronauts for missions to an asteroid.

“With the technology we have available and are developing today, an asteroid mission of up to a year is definitely achievable,” says Major Timothy Peake a participant in the training and the first Eureopean Space Agency astronaut trainee from the United Kingdom.

The training will include vehicle operation, spacewalks, and sample gathering for an asteroid mission. Asteroids differ significantly from lunar landing sites due to their reduced gravity and rubble-like surfaces. Asteroid missions are seen as a potential stepping stone to Mars as well as of scientific value in themselves. Asteroids give insight into the formation and evolution of the solar system. And, occasionally, they can pose a threat.

NASA monitors more than 400 near Earth asteroids that could potentially come collide with Earth. Most of these are considered to be low risk. Some objects, like the April 22 meteorite that fireballed over parts of California and Nevada, are too small or erratic to track. To-date, no technology has been demonstrated that could prevent such a collision, but, says Peake: “with enough warning we would probably send a robotic mission to deflect an asteroid, but if something is spotted late and is big enough we might come into Armageddon type scenarios where we may have to look at manned missions to deflect it.”

According to a report by The Telegraph, details of a potential crewed asteroid mission will be revealed by NASA at a conference in Japan in May. The Japanese space agency JAXA remains the only entity to have landed a spacecraft on an asteroid during the Hayabusa sample return mission to Itokawa.

The video below reviews the Hayabusa mission, which successfully returned to Earth with samples of Itokawa in 2010: