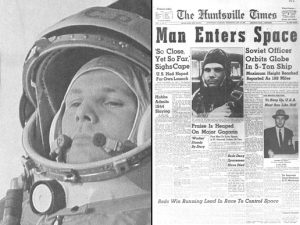 On April 12, 1961, Yuri Gagarin became the first man in space. The Soviet cosmonaut launched aboard Vostok 1, making one complete Earth orbit before returning to the ground 108 hours later. Since that time, Gagarin’s flight has been a symbol of human triumph over space frontier challenges. Since 2001, the Yuri’s Night organization has provided a focal point for space enthusiasts around the world planning parties and celebrations in honor of the event. In 2011, the 50th anniversary of the momentous flight, a film First Orbit was released, recreating the view Gagarin would have seen on his historic flight. This year, ISS crew will celebrate the event in their own way. “The day that Yuri launched was really, really important,” space station commander Dan Burbank of NASA told reporters via a video link on April 11. “It basically set the foundation for a very wonderful and robust space program that we now enjoy cooperatively and internationally.” The crew has scheduled in some free time so they can eat together and “think about the history of our space program up to this point, talk about where we think we’ll be going in the future,” Burbank added. Yuri’s flight almost wasn’t counted as the first space flight. At the time an organization called the Fédération Aéronautique Internationale (FAI) acted as recordkeeper and arbiter of air-based sports and events. FAI’s procedures were derived from aircraft and this heritage was reflected in FAI’s definition of spaceflight which required the spacefarer to land in his spacecraft. The USSR submitted a record to the FAI that indicated Gagarin did just that. However, it was later revealed that Gagarin did not and could not land in the Vostok I. Actually, he ejected from the craft prior to landing. Instead of disqualifying Gagarin, FAI changed their definition of a successful spaceflight. FAI inaugurated the Yuri A. Gagarin Gold Medal following Gagarin’s death in an aircraft accident in 1968. The medal is awarded annually to the space pilot who accomplished the “greatest achievement in Man’s conquest of Space” in that year. Since 1961, April 12 has become the day to schedule momentous space events. It was on that day in 1981 that NASA’s first space shuttle, Columbia, was launched. Below is the film First Orbit, made by filmmaler Chris Riley using footage from ISS that would have corresponded with the flightpath and timing of Gagarin’s flight: