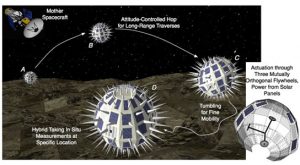 Illustration of the Phobos Surveyor concept (Credits: Department of Aeronautics and Astronautics).

Exploring the low gravity environment of small celestial objects has always posed a challenge to researchers. Now, a collaboration among engineers at Stanford, NASA’s Jet Propulsion Laboratory, and the Massachusetts Institute of Technology has developed a new concept. The idea was designed with exploration of the Martian moon Phobos in mind, and uses an autonomous robotic system named the Phobos Surveyor. The results of such a mission could bring humanity a step closer to a human mission to Mars.

“It’s the next level of autonomy in space,” said Marco Pavone, assistant professor at the Department of Aeronautics and Astronautics at Stanford University.

This autonomous system relies on synergies between an orbiting mother spaceship and a series of five or six rovers, known as “hedgehogs.” The hedgehogs would work together with the mothership to determine their position on the surface and upload detailed information of the region to the mother craft. Utilizing the transmitted data, the mothership will command the movements of the hedgehogs and be responsible for large scale data collection such as mapping, as well as link back to researchers on Earth. These hedgehogs are hopping rovers with a special design that allows them to cover a greater area than their conventional counterparts. Instead of relying on wheels, which are the source of a variety of problems, the hedgehogs can move by means of three rotating discs enclosed within the spiky explorer. Each disc points in a different direction and this technique allows the rover to move precisely within the microgravity environment of a Martian moon. These rovers would easily be able to cross craters, canyons, and other barriers.

Although this platform could be used to explore any smaller celestial bodies, the Martian moon Phobos is the body of greatest interest due to the potential for learning about Mars and the formation of the solar system. A future human mission to Mars is quite costly, risky, and filled with technical challenges such as takeoff and landing maneuvers. If scientists could obtain more detailed information about the moon, it could help pave the way for crewed visits.

According to Stanford’s news service, the mission could launch within10 to 20 years. Considering the travel time to Phobos, the mission would last two to three years. The Surveyor would deploy each of its spiky explorers several days apart, so that the exploration phase, which includes mapping the terrain, would last a few months. Based on this schedule the scientists would be given enough time to assess where to release the next hedgehog in order to most effectively cover the surface.

The Stanford team has already constructed and tested two generations of rover prototypes. Currently they are developing a third generation. It is planned to test different hedgehog maneuvers in a reduced gravity environment through a parabolic flight campaign aboard an airplane. The researchers will present a paper describing their concept at the Institute of Electrical and Electronics Engineers Aerospace Conference in March 2013.