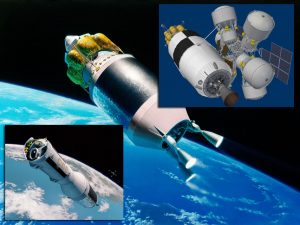 The orbiting fuel depot concept is commonly seen as an alternative to heavy-lift rocket technologies capable of transporting lifetime quantities of fuel in the initial spacecraft launch. However, Michael Gazarik, NASA’s space technology program director, sees the CPST and the Space Launch System (SLS) heavy-lift rocket technologies as complementary.  “To explore deep space we need a heavy-lift vehicle -SLS,” says Gazarik, “We [also] need a deep-space vehicle, and we know the vehicle’s going to need propellant. The SLS is going to get both the propellant and the deep-space vehicle off the surface of the planet.”

Handling cryogenic fuel in space would present in fact several challenges, compared to storable propellant:  “We need to be able to demonstrate how to handle cryogenic fluids in space,” says Gazarik in this regards. “We’re trying to understand the physics of how do you reduce boil-off, how can you get storage for six months at a low boil-off rate, and how do you transfer and really handle these propellants when you’re in space” he says.

The CPST project is under NASA’s Office of the Chief Technologist following the Obama administration’s directive to develop technologies regardless of the final space policy architecture. There is an ongoing argument that it would be cheaper and faster to have fuel tanks in space and launch fuel to them on modern small rockets, than to spend billions of dollars on SLS. On the other hand, Patrick R. Chai and Alan W. Wilhite of the Georgia Institute of Technology presented a study earlier this year estimating that depot tanks would lose about $12 million worth of propellant per month in low Earth orbit if protected only with passive insulation. NASA announced in October the goal of lifting 70 metric tons in SLS’s first unmanned test flight in 2017, with development of 130 ton lift capability to follow.

On-orbit propellant depots have multiple potential uses and benefits. Orbital lifetimes of satellites and mission flexibility can be increased, enabling other enterprises in space like debris clearing. Access to propellant depots could  reduce delays and cost overruns of large-scale missions, and minimize upfront loading of launchers to yield a net safety and reliability improvement. The cost savings could be leveraged to other initiatives, such as developing a lunar lander or a nuclear propulsion module, both of which –in theory- would be unfunded with the SLS option. Finally, fuel depots are an essential step for the long-term human settlement of space. It is believed that the use of depots could facilitate a crewed NASA asteroid mission by 2024.

The CPST spacecraft will transfer 260 kg of liquid hydrogen into orbit in order to study various techniques for keeping it cold and moving it around in microgravity. The main contractors involved are Analytics Mechanics Associates Inc., Ball Aerospace, Lockheed Martin, and Boeing. Boeing is also the industrial beneficiary of the venture and will build the main and upper stages and avionics ring, along with engine maker Pratt & Whitney Rocketdyne and ATK, who developed the Ares I first stage.

The video below shows a test of the J2-X Rocket, one potential SLS engine candidate.