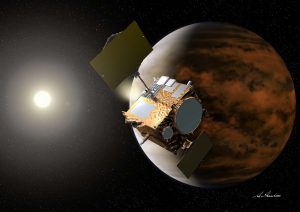 Japan’s Akatsuki spacecraft, that failed to achieve Venus orbit two years ago, is ready for a come back in 2015.

Akatsuki’s main engine conked out during a pivotal orbit-insertion burn in December 2010, and the probe went sailing off into space instead of circling Venus as intended.

Although the main engine has been declared dead, scientists at the Japan Aerospace Exploration Agency (JAXA), believe that the spacecraft should be able to achieve Venus orbit in November 2015 using its attitude-control thrusters. Scientists’ hopes were buoyed after a peri-Venus orbit maneuver was successfully executed on 1 November 2011 using the reaction control system (RCS) thrusters.

“We had never used these thrusters in this way,” said Takeshi Imamura, scientist at JAXA. He added that, “Now we are confident we can conduct an orbital-insertion maneuver using these thrusters.”

The $300 million Akatsuki was launched along with JAXA’s Ikaros solar sail, aboard the H-IIA rocket on 20 May 2010. Originally, Akatsuki was supposed to fly around Venus once every 30 hours. If the maneuver by attitude control thrusters is achieved, Akatsuki will be in a much more elliptical one-week orbit, but the probe can still partially fulfill mission objectives. “The probe could still do good science from such a long, looping path,” Imamura said.

The probe’s objective is to study clouds, atmosphere, and weather to obtain clues about how the planet evolved to be hot and inhospitable to life. Causes for developing such an environment will not only help us understand why the Earth has become a hospitable planet, but also to understand climate change on Earth.

JAXA expressed some confidence in their ability to keep the probe operational and do some valuable science. If the 2015 maneuver succeeds, Akatsuki will reveal the mysteries of Venus, Earth’s twin sister.