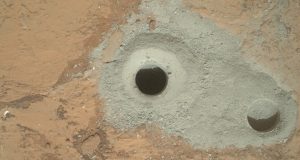 A JPL press conference held on March 12th has announced the latest findings from the Mars Curiosity mission.

The rover, currently located on a flat rocky outcrop dubbed “John Klein”, located in the Yellowknife Bay area within Gale Crater, initiated the first use of its drill tool in February. Geological features and the presence of minerals at the site have shown that Yellowknife Bay was once the home of flowing water, possibly in the form of a river or lake. The minerals were formed from fresh water reacting with olivine and other igneous rocks, that are also present in the area. The drill tool was used to bore into rock, and the powdered dust was examined using the Sample Analysis at Mars (SAM) and Chemistry and Mineralogy (CheMin) instruments.

The results of the sample analysis have shown that this particular region of Mars was once capable of supporting microbial life. The instruments have shown the presence of hydrogen, oxygen, sulfur, nitrogen, phosphorus, and carbon, which are considered to be the building blocks of life. Additionally, analysis has shown that the presence of calcium sulfate in the sample indicates that the water that once flowed in Gale Crater was likely to be of neutral, to mildly alkaline pH.

“We have found a habitable environment,” said Curiosity project scientist John Grotzinger. “The water that was here was so benign and supportive of life that if a human had been on the planet back then, they could drink it.”

The initial drilling process had also revealed gray powder beneath the surface, which indicated that the subsurface layer had not been susceptible to the same level of oxidation as the top layer. This initial finding was confirmed in detail today, as the JPL scientists stated that varying levels of oxidized molecules were present in the sample, ranging from zero oxidation to partial oxidation in certain molecules. This phenomenon was compared to that of an electric battery, where a flow of electrons would produce an energy gradient similar to the type which terrestrial microbes thrive on.

“A fundamental question for this mission is whether Mars could have supported a habitable environment,” said Michael Meyer, lead scientist for NASA’s Mars Exploration Program at the agency’s headquarters in Washington. “From what we know now, the answer is yes.”

Curiosity will soon take a break, during the solar conjunction, before continuing its journey to Mount Sharp, located at the centre of Gale Crater. The panel was asked if it could estimate how long the rover was expected to remain functional, considering that the Opportunity rover had long exceeded its operational life span. The scientists replied that the RTG power source had a half-life of 84 years, and that they hoped that one day, visiting astronauts may shake the “hand” of Curiosity. It is fair to say that there is a lot more science to come in the most exciting robotic space exploration mission of all times.

Below: The Curiosity press conference in full.