As we push toward a space settlement future, some of the earliest safety questions will regard deadly radiation. How will people live safely in space for extended periods of time amidst the ocean of cosmic rays that surrounds our planet and permeates space beyond the protective bubble of Earth’s magnetosphere? What methods of protection will the people living and working in space colonies need, and how capable are we of providing those protections now?

Surprisingly, the question of radiation is a relatively short term one. It is thought that around six feet of soil or around two meters of water works as an effective radiation shield[1], and the citizens of a large scale space colony would have a great deal more mass than that between them and the invisible rays bombarding their home. The risk of radiation is one that the earliest pioneers would have to face: the asteroid miners, construction workers, and architects working and living in the orbital equivalent of pre-fab offices and living spaces. 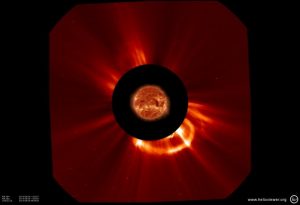 There are several kinds of radiation that threaten the early settlers of space. Solar radiation is the most common and is one of the easier threats to negate. The more problematic elements of solar radiation come from coronal mass ejections. These massive solar events happen fairly frequently, around once every five days. They see the Sun shudder off intense solar weather; this solar wind carries an incredible amount of charged particles that could be dangerous to any insufficiently shielded humans, or even computers, in space.

Astronauts aboard the International Space Station (ISS) have experienced these ejections countless times, and by and large they have been relatively uneventful. There is a procedure in place whereby astronauts are to retreat to heavily shielded areas of the ISS (such as the Discovery module, or the Zarya module), close the window shutters and wait out the solar storm. Similar tactics could be utilized by the builders and miners living in space – their short term homes could be constructed with a central radiation shelter, reinforced with crushed rocks and metals or a layer of water.

Galactic cosmic rays are a wholly different story.  Mysterious beams of charged particles from far off supernovae moving with more energy than those launched by the Large Hadron Collider, cosmic rays stand as one of the most severe barriers to orbital colonization. These charged particles are notoriously difficult to shield against and some shielding can actually increases the amount of radiation exposure[2]. It’s thought that exposure to these rays alone would increase an adult’s chance of lethal cancer by 10-17% over the span of 3 years[3].

Interestingly, the spurts of increased solar weather brought on by coronal ejections may actually help protect our hypothetical pioneers. Due to an observed, but not entirely understood effect known as a Forbush Decrease, coronal mass ejections seem to ‘deflect’ galactic cosmic rays that can provide a window of reduced exposure. This, combined with a series of mechanical and biological radiation protection could prove invaluable to the future workers of space.

The risks posed by these rays are not solely biological. Cosmic rays can cause EMP-like effects on electronics and cosmic rays are thought to have caused damage to the Voyager 2 probe in 2010. Cosmic rays and radiation can cause ‘soft errors’ in sensitive electronics, such as corrupted data, unusually CPU performance, and other issues. As transistors shrink in size, these issues are becoming a concern for ground-level electronics. Several solutions for these issues already exist, with most space-borne electronics being ‘rad-hardened’ to avoid many of the issues. Research is still ongoing, with more advanced concepts, such as Intel’s proposal for including a ‘Cosmic Ray Detector’ in future processors, which would resend commands when a cosmic ray is detected.

These rays may seem unbeatable, but conventional shielding can reduce exposure significantly. Assuming construction of thicker radiation shielding is made a priority by any mining or construction mission, the threat becomes more manageable. The reason radiation is viewed as a roadblock to space exploration is not due to the impracticality of constructing effective material shielding, but due to the vast expense of launching the shielding itself, with launch costs around $10,000/lb ($4,545/kg), it just isn’t feasible to launch a ship with several tons of shielding. A construction crew could utilize in situ materials to construct far more effective shielding than it would ever be cost effective to launch from Earth. 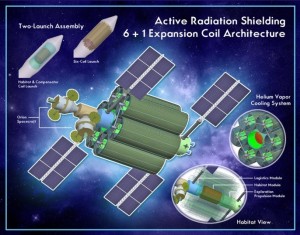 Finally, a more advanced form of radiation shielding could provide the perfect defense against both cosmic rays and solar radiation: electromagnetic shielding. Large superconducting magnets could, in theory, be attached to smaller colonies and project a powerful magnetic blanket over the exterior of the habitat, warding off a significant amount of radiation. This, combined with a layer of water or some other material shielding, would protect against almost any imagined assault by radiation. Active Shielding is currently being explored by many groups, such as NASA’s Innovative Advanced Concepts program, but, as Shayne Westover of the Johnson Space Center puts it – “The concept of shielding astronauts with magnetic fields has been studied for over 40 years, and it remains an intractable engineering problem. [But] superconducting magnet technology has made great strides in the last decade.”

Even with the material shielding and artificially generated magnetic fields, radiation creates a huge risk for any long term human presence in space. Stations and habitats of the future have been designed with this in mind, and have included large amounts of shielding in their engineering. Most design their central living spaces within a layer of rock and dirt, gathered from nearby asteroids or the lunar surface, providing the required 5-10 tons/m2 of mass required to simulate Earth’s protective atmosphere. 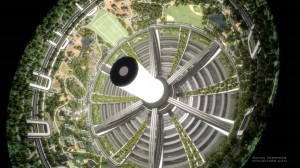 A cut away of Kalpana One. Note the central tube where the emergency radiation shelter would be housed (Credits: NASA Ames Research Center).

Island Three, one of Gerard O’Neill’s designs, is angled as to ensure solar radiation has to pass through a large, shielded ‘cap’ before it reaches inside the colony, with large shielded mirrors tilted to provide sunlight to the inhabitants. In Kalpana One, a settlement designed by Al Globus of the NSS, colonists can take refuge inside a central swimming pool during extreme solar storms, taking advantage of the added protection provided by the water.

While the prohibitive issue of mass and launch costs stop any Earth-borne space mission from constructing the sorts of extensive radiation shielding discussed above, such restrictions would not apply to a colony or work camp constructed in space. Utilizing asteroids and lunar minerals to construct as much shielding as required to properly protect the workers and colonists is the ultimate construction solution.

Despite all of these options, radiation still poses a threat to humanity’s future in space. Many of the solutions rely on a small established presence in space to begin with, therefore the earliest workers will be taking a large risk in constructing these footholds. The threat of radiation is, however, a threat we can understand and overcome – the technology to do so already exists for the most part, the problem, once again, is financial.

Radiation even provides an additional reason why space colonization is so vital to our efforts as a species. With an established space colony, construction on a truly safe, deep space-faring ship would be trivial compared to building one on Earth. With no concerns for launch costs, the radiation shielding and safety measures would be unconstrained and future exploration of the solar system could be a much safer affair.

For an introduction to the Living in Space series click here.

[1] Water in this instance would prove a more effective shielding method, as the water can also be used for coolant

[2] For example, high atomic-number materials such as lead works very well against photons, but can produce body-harming X-Rays when interacting with beta particles.

[3] Based on an estimate from the US Federal Aviation Administration (FAA) on a manned mission to Mars (Radioactivity in the Environment (vol 7, p 894))