The Chelyabinsk meteorite shower on February 15 stressed the necessity of revitalized international cooperation efforts on detection and diversion of near Earth objects (NEOs). The Scientific and Technical subcommittee of the United Nations Committee on Peaceful Uses of Outer Space (COPUOS) discussed that very issue February 11-22 at a prescheduled meeting that only fortuitously coincided with the biggest meteor strike in 100 years and the closest recorded asteroid flyby in history. The Action Team on Near-Earth Objects of the UN Office for Outer Space Affairs (UNOOSA) recommended founding an International Asteroid Warning Network (IAWN) to detect hazardous NEOs, identify their trajectories, and spread early warnings of potential collisions.

“This event in Russia and the pass of the larger asteroid 2012 DA14 are good reminders that many thousands of objects like it pass near Earth daily,” said Ray Williamson, a senior adviser to the Secure World Foundation.

NEOs are Solar System objects such as asteroids whose orbits bring them into proximity of Earth. According to NASA Ames’ Asteroids and Comet Impact Hazards Research Center:

The Association of Space Explorers prepared “Asteroid Threats: A Call for a Global Response,” a document to assist the UNOOSA Action Team. Written by a group of scientists and former astronauts in 2008, the report identifies the need for an Information, Analysis and Warning Network. “If the proposed coordination mechanism was in place” at the time of the Russian meteorite shower, said Sergio Camacho, Chairman of the Action Team, “then at minimum it would have allowed for more observation and better understanding and education of the population on what to expect rather than having a surprise effect with people not knowing what was happening.”

A global NEO strategy would ideally include preventive measures such as changing NEOs’ orbits, and pre and post impact measures, such as disaster preparedness and impact recovery planning. These activities involve numerous political considerations of various natures; international coordination has a ways to go before meeting the need. 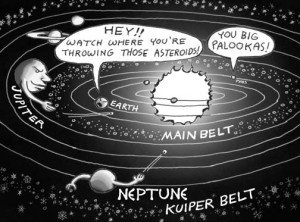 Many countries have national NEO search programs. After the recent event in Russia, the US House Science Committee might include the NEO programs in the NASA authorization bill to be approved later this year. However, such a move would not guarantee more NEO funding due to competing interests in a difficult financial environment. The European Space Agency started a Space Situational Awareness (SSA) program in 2009, to enable Europe to autonomously detect, predict, and assess the risk to life and property due to NEOs. SSA is establishing an automated network of six wide vision prototype telescopes called “fly’s eye” to improve NEO surveillance. “The take-home message is that we have to step up our efforts so that the necessary protection is put in place,” said Nicolas Bobrinsky, in charge of SSA. “Most of the objects that may one day pose an impact risk have not been detected. There is a colossal amount of work to be done.”

NEO are not just hazards. They also present scientific opportunities for geochemical and astronomical investigation, and potential sources of extraterrestrial materials for human exploitation. For these reasons, the private sector has also gotten in on the asteroid game. The B612 Foundation is seeking funds to realize the Sentinel space telescope, able to discover 90 percent of the large asteroids (140 meters in diameter and larger). “The foundation is not undertaking this project for profit; we are a non-profit corporation. Our motivation is strictly to ensure the survival of life on Earth—all of it,” said Ed Lu, CEO of B612. A for-profit initiative, Deep Space Industries, proposed deploying “sentry lines” of its Firefly small satellites in Earth orbit that could collect data on NEOs. “While our primary mission is the harvesting of asteroid resources,” said company chairman Rick Tumlinson, “we believe that virtually the same effort and technology can be applied to removing this threat to our precious planet.”

According to Professor Crowther, chair of the UN Working Group on Near Earth Objects, “We have to decide on a political framework, who’s going to act and under what authority. That’s clearly a role for the UN within the next two to three years. The key is to get it done before it’s needed, when people are much more reasonable, rational and objective.” Crowther concluded that the scientific consensus is already broadly in place, but political consensus may take longer. UN COPUOS will decide whether to endorse the Scientific & Technical subcommittee NEO planetary defense recommendations at the next committee meeting in June 2013.