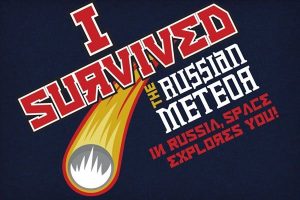 Next time, we may not be so lucky (Credits: Chris Murphy).

Damage and injury from falling space objects are thankfully rare, but as seen in Russia on 15th February, rare events can and do happen, especially when viewed over a long enough timeline.

The injury toll from the Russian meteorite appears to have settled at approximately 1500 light casualties, marking a new record for the highest confirmed amount of people to be injured from an object falling from space.  There are several other intriguing stories of falling space rocks causing mayhem and destruction from the history books, although not all of them had the benefit of dash cams to record the incidents for posterity, so some of the reports can be considered apocryphal.

One such story is that of the Chinese Ch’ing-yang meteorite shower of 1490, which according to multiple sources written at the time, resulted in 10,000 deaths.  Locals in the Shaanxi Province reported that “The larger ones were like goose’s eggs and the smaller ones were like water chestnuts.”  Historians disagree about the number of casualties, but most agree that some sort of event did occur, most likely a meteor airburst similar to the recent Russian meteor or to that of the Tunguska event of 1908. 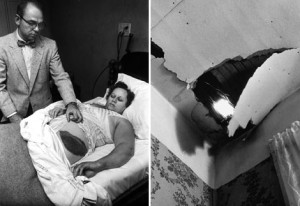 Ann Elizabeth Hodge, showing her bruise and the hole in the ceiling, where the meteorite entered the house (Credits: Getty Images).

There has been only one confirmed incident in modern times, where a person has been directly struck by a meteorite and survived.  In 1954, Ann Elizabeth Hodges was sleeping on her couch in Oak Grove, near Sylacauga, Alabama.  The grapefruit sized object, weighing approximately 5.56 kg, penetrated the roof of her home, bounced off a radio set and hit the sleeping woman, causing severe bruising.

It’s not always direct impacts or mid air explosions that end up causing injury.  On 15th September 2007, a meteorite fell to Earth near Lake Titicaca in Peru, piercing the ground and entering into a water supply. The incandescent rock then boiled the water and forced it to the surface through the crater.  This would normally not be such a problem, except this particular water supply had previously been contaminated with arsenic, which also vaporized and reached the surface, finally settling into the lungs of residents.  30 people were taken ill, but thankfully, the poisoning was mild, and there were no fatalities.

Naturally, not all space rock related casualties are human…quadrupeds have also had a pretty difficult time as far as meteorites are concerned.

In 1911, the Nakhla meteorite, which was found to be of Martian origin, fell into the Alexandria Governorate in Egypt.  The meteorite’s fall was cushioned by an unfortunately placed dog, which according to eyewitness Mohammed Ali Effendi Hakim, was vaporized instantly.

Instant vaporization sounds relatively pleasant compared to the fate that befell a Venezuelan cow on October 15th 1972.  On that particular evening, farmers in the Trujillo area reported hearing a sonic boom in the skies above them.  The next morning, farmers discovered a cow with a pulverized neck and clavicle, and a large rock lying next to the corpse.  Not allowing a meteorite to ruin a good meal, the farmers cooked and ate the cow, and utilized the murderous space rock as a doorstep, where it remained until an astronomer visited the farm to investigate the event.

There are numerous other unconfirmed stories throughout history, including a Chinese woman, who in 1915 had her arm torn off by a direct strike, and a Ugandan boy who was struck by a small meteorite after it rebounded from a tree.

Although these events appear to be few and far between, the recent passing of asteroid DA14 combined with the coincidental and totally unconnected Russian airburst event demonstrate how easily we can be blindsided.   Regardless of the frequency of asteroid strikes, it is clear that they pose a grave threat.  The effects of the meteorite which struck the Yucatán Peninsula in Mexico 65 million years ago resulted in the death of 95% of all life on Earth, and if panspermia theory turns out to be correct, life on Earth may even have stemmed from an asteroid strike.  With that in mind, asteroids could potentially be the greatest creator and simultaneously, the greatest destroyer of life on Earth, and we are at a unique junction in the history of this planet to do something about it.

Below, Al-Jazeera report on the Peru meteorite of 2007: