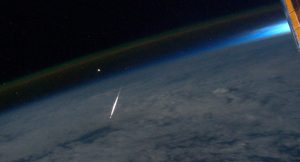 The annuyal Draconid meteor shower, expected by the first week of October, raises concern about possible damage to spacecrafts orbiting Earth, or even to the International Space Station and the Hubble Space Telescope. Small meteoroid impact in LEO are quite common, and the related mechanical damage, which are mitigated with proper shielding, are well studied and understood.  But hypervelocity impacts generate also plasma, a phenomenon which has been reproduced on the ground using accelerators. Plasma can create radio frequency emission, causing upsets in the electronic equipment that can result, in the worst cases, in the loss of a spacecraft. According to Sigrid Close, assistant professor of aeronautics and astronautics at  Stanford University in California, several electrical anomaly have been detected by bombarding spacecraft material inside a vacuum chamber. Such anomalies include electrical charge, plasma production and radio frequency. Close said that the radio frequency appears to be very strongly dependent on speed: meteoroids travel almost an order of magnitude faster than orbital debris. “I would say that there are many unexplained anomalies on orbit that are loosely associated with plasma or electrostatic discharges that may be caused by meteoroid impacts,” Close said. A spacecraft which was probably lost due to an electrical glitch associated with meteoroid impact is ESA’s Olympus satellite, which suffered a gyroscope failure during the Perseid meteor shower of 1993.