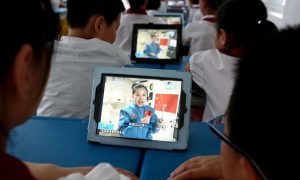 In a sign of China’s evolving capabilities in space, taikonauts on that nation’s latest mission received as much attention for their public outreach as their advances in rendezvous and docking, the primary objective of the trip. The taikonauts aboard the Tiangong-1 module, China’s first experimental space laboratory, gave an inspiring physics lecture to Chinese students while orbiting about 340 kilometers above Earth. Wang Yaping, the second Chinese woman to go into space, became the first Chinese national to teach onboard the station. During the country’s first space video lecture, Wang used different experiments to demonstrate how physics concepts behave in zero gravity. The lecture targeted young Chinese students in order to encourage and inspire an interest in space. Zhou Jianping, designer-in-chief of China’s manned space program, told the official Xinhua news agency that, “The spirit of science among youth is an important drive for the progress of mankind.”

The crew of the Tiangong-1 was launched on June 11 aboard Shenzhou-10. The Shenzhou capsule spent 13 days docked to the station on the final mission scheduled to this orbiting outpost. China’s fifth manned space mission concluded with a safe landing in Inner Mongolia on June 26th.

China has been expanding its human space program, which is directed by China’s National Space Administration (CNSA). China’s latest space missions and further plans make it clear that the People’s Republic is slowly moving forward with their own human space flight goals. Chinese officials have announced their intention to launch their own large space station, larger than Tiangong, and send astronauts to the Moon and Mars. In 2015 China plans to launch the Tiangong-2 space lab, and by 2020 their permanent space station could be built. In preparation for these projects, China completed a test of the new Long March 5 rocket on June 29, designed to loft the new station with its 18 ton payload capacity. As part of this progress, China is taking steps to ensure a strong engineering work force and public commitment for the future of the program.

The lecture delivered from Tiangong-1 was designed to encourage the Chinese commitment to future space advances. It was transmitted to a People’s University affiliated high school where 300 primary and secondary school students could interactively communicate with their orbiting teacher. According to Xinhua, the state run news agency, more than 60 million students across China watched the class about Newton’s Second Law and the effect of zero gravity on various objects. The class lasted for 40 minutes, and a few students were given the chance to ask questions. One student asked Wang if she had seen any UFOs, to which she answered, “not yet.” But she went on to explain some of the real wonders of spaceflight, such as experiencing 16 sunrises and sunsets each day due to the frequency of their orbit.

China Daily reported testimonials like this one from Luo Jiangyuan, a high school student, who plans to study science in college. He said, “When I learned about those laws of physics and weightless condition at classes before, I needed to imagine what would happen. But, at today’s class, I am able to see what really happens. It is thrilling.”

The country has had success in previous space-related goals: China wanted become the third nation to independently send humans into space, an achievement that they reached in 2003. The country’s space program certainly shows no signs of slowing down now.

You can watch the space lecture here. Below is the recent Long March 5 test.